Heading over to the Lakes to support leg one over Skiddaw and Blencathra the clouds descended and it was quite heavy rain by the time I arrived in Threlkeld to leave the car at the end of leg. One lift later by another member of the support team. Rather worryingly there was a distinct lack of anyone else, well there were a lot of tourists, in Keswick. Even Andy wasn't to be seen.

As the magic hour approach though more and more appeared, including Andy. Still worrying was the fact that I was the only support runner for leg1! With about ten minutes to go the others turned up, traffic jams on the M6 being the excuse. There will be four pacers on this section. 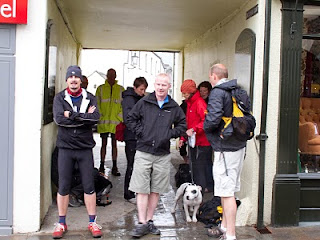 Andy, Frazer and Dave avoiding the rain before the start.
As if to herald good times the clouds began to lift. With a slight delay for photos we were off. No mistakes through the ginnels and back roads of Keswick and into Fitz Park. Then it was a case of stripping off the layers as the uphill work began. A good pace (read - no talking cause we couldn't!) saw us at Skiddaw summit in the clag around 3 minutes up on schedule. Down to the fence then the long pull over to Great Calva. 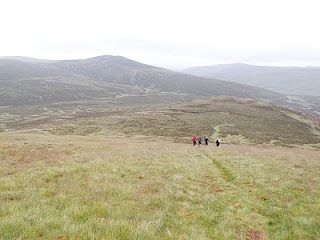 Heading to Great Calva
Much wetter underfoot than the last times I'd been over this ground but no point in worrying, just get on with it. Just 40 minutes and we were on the summit then a blast down through the heather to the River Caldew which was fortunately low. Then the long drag up on to Mungrisedale Common. Light rain was now blowing across but it was so warm that there was little point in putting waterproofs on as you'd get as wet or wetter.

It was nearly dark by the time we got to the top of Blencathra and distinctly chilly in the breeze that the fell had been protecting us from. Headtorches on then it's down Doddick Fell. This is distinctly slippy with occasional wet slate slabs covered in pebbles! Most of us slip at some point on the descent but eventually we hit level ground and trog through the bracken to the fell gate. We've lost five minutes on the descent but are about fifteen minutes up overall.

The next support team are ready in the rain and within a few minutes they, and Andy, are off into the night.

After dropping off a couple of the pacers in Keswick I head home, getting into bed at around 1:30AM! Unfortunately during the night the weather deteriorated and despite keeping up with the schedule on leg 2 it began to slip on leg 3 and by Great End Andy was 90mins down so with no break in the weather due he decided to call it a day. A good effort given the conditions.

Unusually it took several days for my quads to recover. I'm not sure what I've being doing different to cause this. Of greater concern is my right knee as it feels like the cartilage problem I suffered two years ago has returned. It's OK going uphill but downhill is painful even just walking.  Hopefully it won't affect my climbing just yet.
Posted by Bob Wightman at 21:28