As ever with ITTs, the kit taken is a balance between taking as little as possible (the only item of gear actually mandated for the HT550 is a SPOT tracker) against taking enough to be able to survive, if not entirely enjoy, the experience. Most are going to take five to seven days for the route and unless the forecast is very settled it's likely that you'll experience most varieties of Scottish weather.

It's almost a given with gear that:

a) you'll get things that don't work;
b) nearly work; work in some conditions but not others;
c) could be lighter, etc.

Over time you learn and adjust what you take. A couple of years of doing shorter ITTs had taught me what did and didn't work for me and given me ideas about what I needed, there's always a balance to be struck between conflicting aims. There's no way I'd set off on a long and, on occasion, quite serious and committing route like the HT550 without having the whole system "dialled", so I'd used it for several shorter and not so short trips earlier in the year to iron out any problems.

Time is also an advantage in that you can read up on what other people have taken and had success or failure with on previous editions of the ride. Learning from other people's mistakes is very satisfying! The trick is to avoid fixating on "they had X bit of gear and it went wrong" and look at the factors what led to it being the wrong bit of kit. Mistakes are rarely down to one thing, they are usually a combination of compounding problems that individually wouldn't have been a problem.

I had approximately 22L of pack space on the bike. The idea was to have a little spare just to allow easy packing in the morning after bivying. Generally I pack according to need, so all the bivy gear is in one bag, spare clothes in another, etc. Before you read any further: remember that this kit is what I can handle and deal with any shortcomings. It may not be suitable for anyone else or even myself in different circumstances. With that caveat this is what I ended up taking. From front to back on the bike ...

Wildcat Lion handlebar harness with Wildcat 8L double ended dry bag.
This held my bivy kit:
Also in the harness were a piece of Tyvek as a groundsheet and an Endura MT500 waterproof jacket. 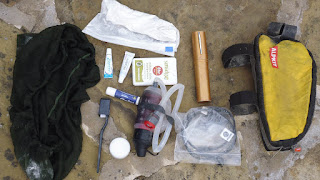 Beerbabe downtube bag
Basically repair/emergency stuff that, apart from the chain oil, I hoped not to have to use. 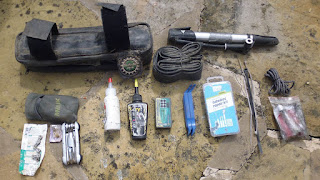 Due to the variety of weather I used (and needed to use) just about every piece of kit I took, I didn't use the spare cycling top or one of the pairs of gloves. I'd intended using the Assos bib shorts but they are a bit too well padded and on longer rides seem to cause more problems so after the first day I switched to the Endura bibs and wore those for the rest of the ride.

My requirements for the bivy kit were that it:

1. was adaptable to as many sleeping situations as I might encounter.
2. could deal with midges!
3. was light and not bulky.

I wore the following:

I tend to be quite warm when riding so don't need much in the way of clothing - on the Rovaniemi 150 I was fine in some pretty light kit down to -16C (OK, just about fine at that temp), the extra clothing mostly lived in my shirt pockets so easily to hand. There are some mountain bikers who dislike arm and leg warmers because they "are roadie kit" but a hundred years or more of figuring out what works shouldn't be dismissed. Early mornings can be chilly so arm and leg warmers are useful for a couple of hours until things warm up when they can be stashed in a pocket. Leg warmers are also useful on river crossings - take them off before crossing and put them on again after so they don't get soaked which would happen with full length trousers. This also means that you can put something on to help warm you up.

The windshirt is useful for avoiding a chill on long descents and early in the morning but also handling light drizzle. I had considered buying something like the Rab windshirt but there was a Haglofs semi-insulated windshirt for sale on the BB forum for £30 - it fitted so that was that. I carried it in my shirt pocket: handy for light showers and for putting on as soon as I stopped so that I didn't chill.

The thermal top and shorts were just used on bivvies. Having something dry to change into makes a big difference to me staying warm and therefore how I sleep, no use in expending energy to warm back up. The midge net went in the top tube bag - needed to be handy just in case.

I struggle in the rain and have to be quite careful that I don't get cold so while I could have taken a lightweight waterproof I chose the much heavier MT500 jacket. Last year on the Braunton 150 I'd made the mistake of taking the lightweight jacket and once the bad weather came in I couldn't keep warm as the fabric was too light and pressed against me then things became wetter and wetter. Conversely I used the MT500 in Iceland and it dealt with wind and driven rain very well indeed. The MT500 is over half the weight of the whole bivy kit so in some ways it's robbing Peter to pay Paul but for me it's worth it.

The shoes are about a year old so nicely worn in, I'd probably done about 1500Km in them before this ride. In the event they only just lasted - the toe box on both shoes was basically worn away and the soles were beginning to delaminate. Another day or two of riding and they'd have fallen apart!

All very bike specific but there's very little weird stuff on the Solaris so I can get by with normal tools. I only used the chain lube. This was actually too light a formulation and a few puddles would strip the lube. On the last day I needed to reapply lube three times.

Where would we be without all our gadgets eh?

Power was provided by a 20,100mAh battery linked to whatever kit I needed to charge or keep running. The battery weighs 370g(!) but I don't have a front wheel with dynamo or the related kit like converter, buffer battery, etc. I had three main rechargeable electronic devices, one (the GPS) saw near constant use whereas the other two were intermittent.

1. Garmin Oregon GPS. I've a USB cable with a right angled plug that allows easier connection to the Oregon when it's on the bike, it also reduces risk of lateral knocks or strains on the connecting socket. There's upto 20 hours' run time on the batteries

2. Exposure Joystick light. Very lightweight (87g) and it can be helmet mounted so no problems with the bar harness and bags getting in the way. The light has lots (too many?) modes but I settled on programme #3 then mostly used the lowest setting. With the amount of night riding I did, and with it only "dark" for four hours a night in May/June at these latitudes, one full charge was fine, I still had 50% of charge at the end having ridden through the last night.

3. Phone. Most of the time this was switched off, I'd only switch it on if I was somewhere I knew I could rely on getting a signal and I happened to be stopped for food/supplies. With such limited usage I hoped that it would last the whole ride on one charge.

A SPOT tracker is required if you are part of the group start. A fresh set of batteries would be enough for the whole route. I clipped this to the top of the Tiger harness - I also had an extra tether just in case the main attachment broke. It's a Gen 2 device so needed resetting every morning - basically turn off on reaching bivy spot then starting it up again in the morning.

The route (supplied in two parts - northbound and southbound) was loaded onto the Oregon. I also had some very basic directions: "L at edge of forest. L (SA) below dam. Take RH track below second dam" that I could refer to without needing to turn on the GPS' screen. Finally Ian Fitz let me have a copy of his route notes which have things like shop opening times, I adjusted the timings on these to something that I thought I could manage.

My strategy was to ride steadily in the evening, hopefully I'd get to an uphill bit at that time enforcing the pace, until about eleven pm when I'd look for somewhere to bivy. This way there was limited riding at night, the only significant night riding was on the last night when I was attempting to get a finishing time under five days.

I'm not sure what if anything I'd change. Probably take more socks as well as something to take care of my feet which were a bit shot after five days' riding. Even if the weather was worse I wouldn't take much more in the way of clothing, maybe an extra thermal top and some waterproof cycling trousers.
Posted by Bob Wightman at 22:07