A bikepacking institution. The first bank holiday weekend in May sees a gaggle(? what's the collective noun for bikepackers?) of assorted shapes and sizes descend on a small farm in mid-Wales not for a rave but to have a chat about bikes and maybe ride them around the Welsh countryside aided or hindered by a set of grid references that people may or may not chose to visit. This year there was a set for mountain bikes and a set for "gravel" bikes.

This was its tenth year. 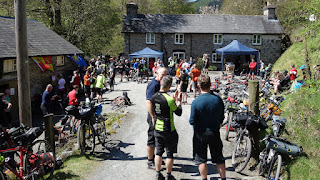 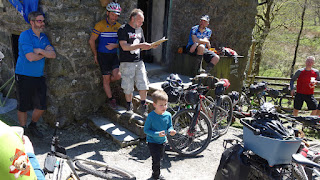 
The Star at Dylife is becoming another institution, it reopened a couple of years ago and a pre-event meet up has started to become a "thing". Again, we'd never been. Cath was insistent that we didn't go in until 7pm but I overruled her and we had a meal before most people arrived and the chatting and drinking began. We didn't have too much to drink and crashed out in the tent at a sadly sensible middle-aged hour.

Despite having driven past it many times I'd never been in to The Cross Foxes above Dolgellau. Very posh. There were quite a few other BBers sat outside having a drink. Two drinks and two packets of crisps, that'll be ten pounds please sir. Hmm, come to think of it, it felt quite good to be standing there covered in sheep and cow muck adding to the general ambience for the benefit of the G&T swilling Jaguar driving crowd.

Oh, yeah. That's The Hand, you know the one with the massive carved tree trunk outside just in case you can't read. We went to the other one. Two pints of lager shandy and a couple of packets of crisps please. that'll be ten pounds please sir. Still we'd ridden over the Berwyns via the Wayfarers then down to Llanarmon Dyffryn Ceiriog. And it was hot. We decided on a second pint each but in an attempt to look after our waistlines and save money skipped the crisps.

One thing you soon learn about Mid-Wales is that there's a disconnect between bridleways and tracks on the ground, it's as if they are from separate realities. Be especially aware of those lines on the map that look suspiciously straight. Wales doesn't do straight lines, not even the bits the Romans did for us, it's where they sent Slartibartfast's cousin to try and get the crinkly bits out of his system. Basically unless you've been on a particular stretch of bridleway/track you can't guarantee it will exist. 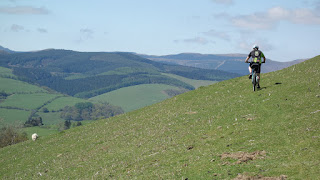 We spend/waste half an hour in Dyfi forest trying to find a non-existent bridleway. Actually the first two sections existed on the ground in roughly the right place, one bit being used by one of the Mach MTB trails, the last section was nowhere to be found. We ended up following a track out of the forest and going cross country to join up with where we should have been.

You might also find "identical" features parallel to those you are expecting: BW gate at bend in woodland fence for example, then force the rest of what's around you to fit. The problem here is that it will shortly put you smack bang in the middle of an hour's hike a bike and a marital screaming match discussion. In this instance not only did the parallel universe bridleway not exist but neither did the one in our own universe that we were meant to be on.

Kit and its malfunctions

With 150 riders (and bikes) there's a lot of potential for things to go wrong though turning up and asking if anyone has a spare chainring ... One of the "interesting" parts of the pre-ride milling about is the "weigh-in": bike and all your kit, food, rucksack, etc. goes on the scales. The weights ranged from a mighty 50kg or thereabouts down to a very impressive 14kg (my bike was 18kg so nowhere near the weight weenie prize of a pork pie) 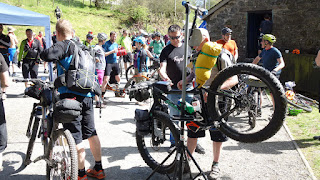 On the way to Bala we come across a chap with his bike upside down and fixing a puncture. "Just went bang! and deflated."" A definite big hole in the inner tube that's lying on the deck. As he's inflating the replacement he notices a tear in the side wall of the tyre next to the rim - the cause apparent of the blowout. We offer various suggestions when I remember that I've an expedition sewing kit in my bag. I bought this in the mid 1980s and had never used it in all that time, I'd just thought I'd shove it in. Looking through the items there was some nylon thread so handed over a needle and some of that and he proceeded to stitch the tyre together. He managed to get to Bala where the bike shop eventually opened and he purchased a new tyre. Passing on the trail karma from the Dirty Reiver the other week.

At the cafe in Bala another rider, Craig, arrived with a rough bottom bracket. I'm not sure how he sorted that out - if indeed he did.

We'd just done an hour's hike-a-bike having lost the non-existent bridleway (see marital "discussion" above) when we rerouted from the next bit of non-existent bridleway and through a wind farm to get to the road. The rider ahead wasn't moving quickly, or at all as it happened. Broken saddle rail. I think he did a lot of standing up on the way back to the finish.

Being out for three days means two nights of sleeping under the stars. Route planning helps here as you want a variety of options depending on how fast you move and  on weather conditions. You don't want to get to your chosen spot too early in case someone sees you and asks questions but equally you don't want to be too late which makes setting up the tarp harder.

Saturday night we found a grand grassy balcony overlooking the Wnion valley with a temperature inversion filling the valley beneath us with mist. Our bivy bags have very slippery bases so finding somewhere flat is almost essential otherwise you end up somewhere you don't want to be! The mist did come in through the night but had gone by morning but there was huge amounts of condensation, the tarps were as wet as if it had been pouring down all night. 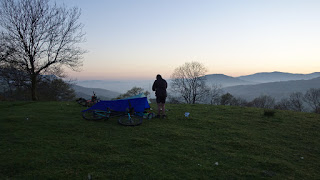 Sunday night was on the "shores" of Lake Vyrnwy, we'd been told of there being lots of bivy spots along the lake but they must be on the east shore whereas we went along the west shore so that we'd get the early morning sun. The main problem was that everything was at an angle of 45 degrees! By the time we found somewhere we'd ridden most of the way to the end of the lake. A bit of fussing and we ended up using the trunk of a fallen tree to stop us sliding down the slope! The second night couldn't have been more different to the first as everything was bone dry and just packed away. 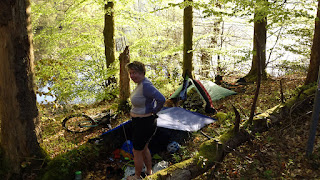 Our route didn't really pass any on the first day but an executive decision, i.e. we were hungry, took us in to Bala on Sunday morning for breakfast. The cafe didn't really do cooked stuff, well apart from bacon pancakes??? 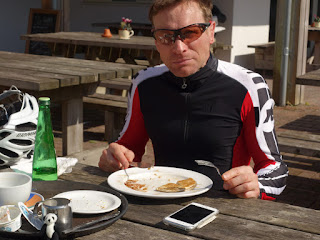 Monday morning we rolled along the road by Lake Vyrnwy to find a gaggle (still no collective noun for bikepackers) by a cafe near the dam. It wasn't serving food but the woman was filling water bottles which given the heat was welcome.

Over a couple or three hills and we rolled into Llangadfan. I spied a flag advertising ice cream but instead found a cafe. The owner must have wondered what had happened as about fifteen sweaty, grubby cyclists arrived in close order! Nice food though. 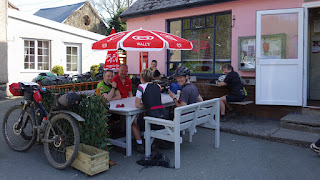 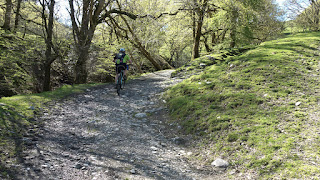 Oh and Cath got a Strava QOM on one climb, I think she's been doing some secret training. That's her going for it!
Posted by Bob Wightman at 06:59