Good to be Back!

Well, having got itchy fingers for getting out climbing before Christmas I finally managed to get out!

The cold weather that put paid to getting on the rock continued and as we are all aware is basically still with us nearly four weeks later. This meant that climbing meant winter climbing - yeehah! So the first day out was going to be heading up to Brown Cove Crags on the west side of Helvellyn. However we ended up on Tarn Crag on Dollywagon Pike, it wasn't that our navigation wasn't up to much, rather Steve didn't want to take his new car over a possibly icy Dunmail Raise so a change of venue ensued.

Unfortunately Steve parked at the bottom of Dunmail not at the top so we had a couple of extra miles and around 800ft extra climbing to do. This wouldn't have been so bad if the snow was in decent nick but everything was unconsolidated so post-holing was the order of the day. Very hard work. We had intended to head over to Jogebar Gully on Nethermost Pike but we'd have taken hours to get there so settled on one of the easy gullies on Tarn Crag. To save time (there were three of us) since the wind was quite strong and blowing a lot of spindrift around we settled on climbing on a single rope. Everything was deep unconsolidated snow so any steps that were already there tended to collapse when you stood on them. Four months of not climbing meant that sizing gear (such as there was) took time and the placements weren't that good anyway. Pete (the third man) and Steve tied into the middle and end of the rope so we just moved together with poorish gear about every 30 metres. The cornice was "interesting" as the spindrift meant I couldn't open my eyes! Eventually I was on the top trying to hide from the wind.

After a short attempt to walk up to the summit we decided that we'd better head back. Our footprints from the morning were filled in so it was more hard work. Just before the col between Fairfield and Seat Sandal I went through a snow bridge into waist deep bog! After getting pulled out by the others it was just a case of carrying on - it was no place to stop and change socks. I use the Paramo system rather than Goretex and within ten minutes I was warm and dry. Eventually we got back to the car - Steve had carried skis most of the way up so got a jump on us on the way back. All in all a hard day out, showing just how hard winter climbing can be and that there are different types of hill fitness.

The following Friday Steve and I decided to get a night climb in - Low Water Beck above Coniston. It had been getting ascents through the week and should be in condition plus we'd avoid the crowds. A slight delay in setting off meant that we weren't ready to leave the car until 9:20pm. Also I seemed to have lost one of my axes the previous weekend - to make things worse it was the newest of the pair! Mind you it was still 23 years old! I was thus using one of my wife's axes. An hour or so later and we are gearing up at the foot of the falls. There's still quite a bit of water running and some big holes in the ice but it's climbable.

Steve heads off, he's not done much winter climbing so this will be a decent step up. Plenty of gear, some odd line choices and he's up. Following the pitch his line choices don't seem too strange, mostly to avoid spray from the running water. There's a step or two of Grade IV but mostly it's kicked out. Just above the belay there's an awkward chockstone to get round then some gear up and right before a delicate pull onto the base of the final ice slab. There's nothing to belay to at the top so a ice-axe-T belay is needed. Then it's a wander up easy ground to Low Water and off back to the car. There's more cars parked up now (2am) with sleeping occupants so it's quietly away. It's 4am by the time we get home. Someone posted on UKC that they got to the foot of the route at 8am to find 8 climbers on it already!!

We reckoned that with the long freeze the waterfall beneath Hellifield Crag (Crookstones) would be frozen so four of us headed up there to check it out on Sunday afternoon. I'd been into Skipton and splashed the cash on a pair of new ice axes (DMM Rebels) so was keen to try them out. Deep snow meant slow progress, only to find that there was very little ice there! I reckoned that I could get a line up the edge of the fall where the ice looked solid. Rope around my waist - modern climbers eh? - I set off and removed most of what was there with one tap! It was powder snow  covered with frozen spray. What was left was about 30cm wide and maybe 20cm thick at the thickest part. 10m later I'm on top. I drop the rope so Steve can lead it and the others follow as seconds. We think it's a possible first ascent but can't be sure. 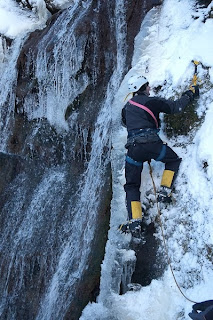 Unfortunately the thaw has now set in so I might have to wait a bit to do more ice climbing but it's good to know that I can do some climbing. With all the snow and ice I haven't done any running for over a week so might start getting more done now that things aren't quite so bad.
Posted by Bob Wightman at 18:59 1 comment:

Some time since my last posting - seasonal holidays and all that. Shortly after my last post I began to get itchy finger about going climbing again. Unfortunately on that weekend no-one was available to head out so I went for a couple of long runs instead. The arm still isn't straight (there's about 20 degrees to go before full extension) but I was definitely keen to get out.

As far as running goes, well the last two months of last year saw me do a lot of miles, perhaps because I've not been doing any other sports like climbing or cycling. In fact I felt confident enough to offer to help Mark Smith (Swiss Toni on the FRA forums) in his attempt to complete a mid-winter Bob Graham Round on the weekend before Christmas. His help on leg three had pulled out so he had turned to the forums for help. In the event five of us turned up at Dunmail Raise at 4am on Saturday morning. With temperatures of -6C it was a case of wrapping up warm rather than going light. A few slight mistakes in the navigation during the dark hours but once sunrise came spirits lifted and we had a great session from Bowfell to Scafell Pike. Ultimately Mark got round in just outside the 24hr limit but being out for that length of time in such temperatures it can hardly be described as a failure.

With the holiday season over and the cold weather continuing, yesterday we headed over to the Lakes for a bit of winter climbing. The original plan was to go to Brown Cove Crags on the west side of Helvellyn but Steve didn't fancy driving over Dunmail Raise in case it snowed so we changed plans to Jogebar Gully and headed in from Grasmere! After three hours of post holing through the unconsolidated snow we changed plans again and did one of the easy gullies on Tarn Crag on Dollywagon Pike. The wind had picked up and the spindrift meant that often we couldn't see anything. At the top of the route I was nearly being blown off my feet by the stronger gusts!

On the way back it was more post-holing as our tracks had filled in with drifting snow. I managed to break through a snow bridge and ended up to my waist in bog water! Fortunately since I was wearing Paramo salopettes my legs soon dried out though my feet remained wet inside my plastic boots until we got back to the car.

An accident on the A65 and long queues of slow traffic meant a long drive home. I'm definitely not as fit as I used to be :-( a sedentary job doesn't keep you fit like scaffolding does. Mind you I'm also nearly thrity years older!

My arm felt OK, though obviously it was quite weak since I haven't really been using it in anger, a bit of real life stresses and strains should help it rather than the formal exercises I've been doing.
Posted by Bob Wightman at 09:23 No comments: