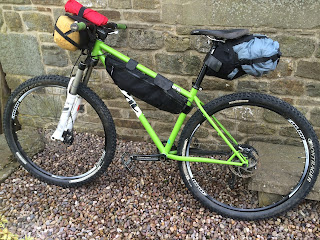 I'm surprised at the bivvy time actually since it felt like we were there for much less time. The real timewasters were at the pub in Gunnerside and extending the breakfast at Feizor. The first might be better done by carrying the evening meal and cooking it at an appropriate time. The breakfast was just me faffing and timing - if I'd left a couple of minutes sooner I wouldn't have seen Simon and the other rider come in.
Posted by Bob Wightman at 21:42 No comments: