Finally my hands are warm(ish), I'm somewhere on the last hill of the route. A street light appears over the brow of the hill, incongruous in the vast forest. Street light means road, road means end of the hard stuff, I cross and drop down to the Ounasjoki which will lead me to the finish.

Suddenly the temperature plummets and in the 200 metres between the road and river my hands become blocks of ice. The next, final, checkpoint is a kilometre along the ice. I can warm up there.

I turn my head and notice something. There, hanging in the sky, is a curtain of green light with translucent veils to either side. The Northern Lights. I stop, hang the race, I take in the moment, the silence and beauty are stunning.

"Meenus sixteen" says the woman as I warm my hands by the fire. "Minus six?" I say, confused as to what she is really saying, "No! No! Meenus sixteen. One, six". It`s stinging and I spend time to fully warm myself.

I don't know what got me thinking about the Rovaniemi 150, perhaps it was watching the blue dots on a tracking page a couple of years ago, maybe the idea of something different. Anyway, I filled the form in, using my Himalayan and winter alpine climbing "career" as my background experience. Alex, the organiser, seemed happy enough with that and with a bank transfer of the entrance fee I was in. It would be my first bike race. Ever. Just one problem.

I didn't have a fat bike.

I then remembered that that I`d seen a rolling chassis for sale on the Bearbones forum. A quick check and it was still for sale. It was being sold by Ian Barrington who`d been one of the blue dots I`d watched eighteen months earlier. A bit more internet shopping and spending of money and I had the parts to complete the bike. See this post about that process.

Alex spends the first few minutes of the briefing listing the reasons that we might be disqualified, then it's on to the safety aspects of the route and what to do in case things go wrong. The discussion and slides of frostbite had a few squirming.

It`s cold down on the Ounasjoki river as we mill around, the weather is clear skies rather than the cloud of the last few days. A couple of recce rides in the days before had revealed that conditions were fast, I'm thinking that fifteen hours might be a reasonable target. Finally the clock has counted down and we are sent on our way. The pace is fast, too fast for me but there are three races and quite a few of those ahead will be on the shorter 66Km route.

It`s almost a carnival atmosphere as we head up river, TV crews track us on snowmobiles, locals clap and cheer. The pace still isn't letting up and the lead riders are already dots in the distance. I get to the first checkpoint, we are so quick that they haven't had time to get themselves set up: "Thirty seven minutes, very quick" Thirty seven minutes for eleven kilometres! Maybe Alex was right and the fastest riders will beat ten hours.

Still, that's them, the fast riders, not me.

The second checkpoint marks the start of the first "Pain in the Ass" sections, only 700 metres but it's unrideable as it twists in and around trees, saplings and boulders. Eventually it debouches onto the first lake section. 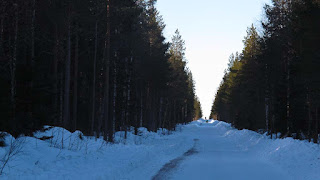 Legs feel good, I'm not overheating or struggling at this pace. Sod it! This is a race, let`s race! 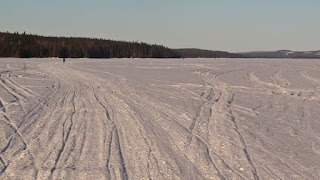 I start to reel in the dots in the distance, the first is one of the 66Km racers, the next is on the 150. The lake goes on for ever and it's beginning to get tiresome when a sharp left signifies the split between the shorter and longer routes and leads up and off the ice onto a track. Another couple of riders are caught, they talk to themselves but don`t reply to my "hello". Their problem.

There are, apparently, 188,000 lakes in Finland, pity the poor sod who had to count them:

"Hi, I`m Laassi, I`m new here, I finished college last week. Do you have a job for me?"

Checkpoint three takes forever to appear, I`m beginning to think I've missed it. Sort out water, my left boot is niggling so retie the lacing. Grumpy and Grumpier arrive, still not talking to anyone but themselves. Time to go!

Fat bikes are for snow right? Except that in Britain we don't get lots of deep dry snow, just a centimetre or two of slush. The next kilometre or two demonstrate my lack of technique so to cheer myself up I decide to make some snow angels. Others were less complimentary and called them holes. Grumpy and Grumpier aren't impressed by my artistic merit and disappear down the track.

Eventually the tricky stuff ends and I can make good time again. Four hours gone and I've done a third of the route, could twelve hours be doable? Checkpoint four is in the middle of nowhere and is the last one before the Bridge of Doom. We`ve been told not to ride this as getting wet isn't advised. No worries, but it's dicy even on foot. "Pain in the Ass" number two follows, it's not as bad as the first.

About half the notes I make at the briefing are for this section of twenty kilometres between CP4 & CP6: bridge of Doom, wolves, open areas that could be windy and cold, etc. "You probably won't see the wolves".

Checkpoint five is also in the middle of nowhere - the guys have just turned up on snowmobiles, put up a tarp and got a brazier going. "The leaders went through an hour ago. The guy in second place is doing the 300Km race" Crikey, that`s some pace, he must be on a promise! Grumpy and Grumpier are there, still not talking to anyone else. Time to leave them behind. I won't see them again.

I`m enjoying this, really enjoying it. 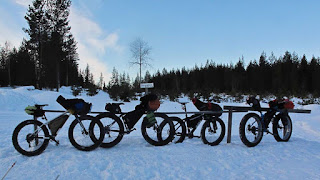 I'm over halfway now and at the furthest point of the route from the start/finish. There's three bikes outside the hut at checkpoint six. The riders are inside warming themselves by the fire. I spend time drying my gloves and eating. Time to go. I leave at the same time as another rider and initially struggle to keep up with him but he takes a tumble, he's OK, but he never catches me.

There follows fifteen kilometres of fast, smooth, logging road that is almost all descent. Descent means no effort helping keep you warm and I'm cold by the time I get to the main road. Two thirds distance done in eight hours, twelve hours is still doable, just. The light is fading, time to put an extra buff on as a face mask. Keep pushing on, lights go on, the road gives way to forestry track.

It`s not fun anymore, but perversely I'm still enjoying myself, my hands are still cold and the next checkpoint is beyond some indeterminate number of corners along this forestry track. There`s a light behind me, slowly gaining. It`s a snowmobile and it digs up all the good surface so the going becomes harder. I smell the woodsmoke from the checkpoint fire before I see it. There`s another light gaining on me, a rider, one of the three from the hut thirty kilometres earlier, but he doesn't quite catch me before I stop.

I`m cold and sit by the fire for a good while. I get my phone out to text Cath, it`s so cold that the touchscreen initially fails to respond. There's a text: she was third lady in her race and won a cup! 35Km to go, a couple of hours, I don't think I'll make twelve hours though. Readjust to thirteen.

"If you're going through Hell, keep going."

Tired now, the other rider leaves before me, I don't care, just finish. More fire road with soft surface and I'm having to walk some of the slight uphills. I can see his flashing red rear light about a kilometre ahead. The track twists and turns dropping down to the last lake. Just keep going.

In the middle of the lake I stop, the crunch of my tyres on the ice dies away, Orion is hanging in the sky in front of me, Cassiopeia suspended above. I scan the night sky, nothing but stars, no magic. Press on.

The last hill, it`s a drag, that gentle angle that you think should be easier than it turns out to be. I can see the lights of planes landing at Rovaniemi airport, the track swinging left and right so sometimes they are in front of me, sometimes to the side. Over the brow of the hill I see a street light.

At the last checkpoint there are two riders: the one who`d caught and left me at the previous stop and the 300Km race leader. He's mad as a box of frogs and aiming to complete that route in one go without sleep. I ring Cath to tell her I'll be 45mins to an hour. Once I`ve warmed my hands I'm away again, the light of my competitor acting as a target. It`s now 2110, I have fifty minutes to get under my target of thirteen hours.

Within a kilometre I've caught him, we ride together for a while: "The first third is a race, the second third is touring, the last is survival." he says, I know what he means. My hands have gone cold again, push on, keep generating heat. The elastic snaps (he said afterwards that his back was hurting and couldn't apply power) and he falls further and further behind, the lights of the city beckon me on.

I check my GPS: 2153, seven minutes for the last Km and a bit, could be close! Off the river now, up the bank. No traffic on the road so I'm not waiting for a green light. In the hotel lobby I lean my bike against the wall and head to the event HQ and give my number. A shake of hands, some photos. I'm done.

Too tired to ask anything, it's the next day when Cath checks Facebook that I find that I finished in tenth place in 12:59, the winner took 10:25 so 25% longer which is good for me. I'm really, really pleased with that. She said that at the next to last stop I was still only an hour or so behind the leaders so my time for the last bit reflected how truly tired I was.

"Sure Laassi. Do you want to take your clock and retirement card with you?"

The route is great, varied, even the "Pain in the Ass" sections are enjoyable in their own way, if it was all lake and fire road it would be fairly boring. I really enjoyed it, even the bits where I struggled with the cold (my fault really, damp gloves along with pogies that weren`t capable of dealing with moderately low temperatures). I definitely made mistakes: apart from the gloves I didn't get food and water properly sorted, my understanding of snow and appropriate tyre pressures also needs work. On the plus side: my pacing was fine, I could see myself working my way up the signing in/out boards at each checkpoint and my choice of clothing was just right, having seven pairs of gloves and four pairs of trousers to choose from helps!

Getting to Lapland for the Rovaniemi 150 might seem a lot of logistical effort for one race but it is much, much more than the 150Km distance and 1300 metres of ascent: alone, at night, in the vast forests of the north you realise just how much we take for granted and how comfortable and secure our lives really are.

"If you are eaten by wolves, you are disqualified!"