Having missed out on getting a full twelve months' worth of bivvies for the last couple of years, in each case just a month was missed, we determined to give the Bivy-a-month challenge a proper shot.

Another BB "do", this time the winter event. We'd got to the cafe at Bwlch y Sarnau and were wondering where to kip. I thought I'd better put a jacket on and noticed some old farm buildings so ended up with a four star bivy! Plenty of room to get us and the bikes inside out of the wind and rain. Turns out that the whole farm was up for sale for redevelopment so maybe not an option in future. 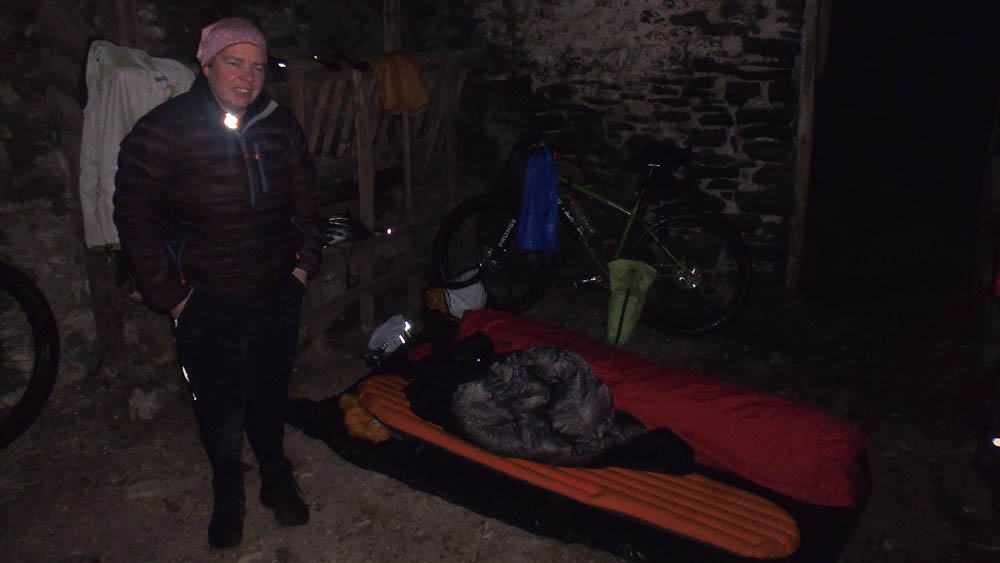 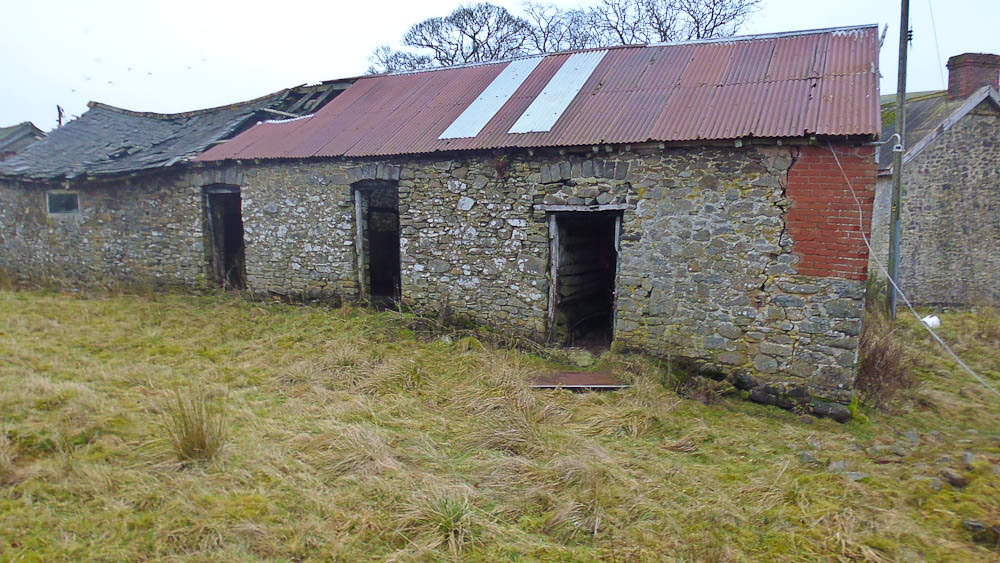 A last minute grab this one. Decided to keep it very local so headed up the hill behind us, me on the fat bike, Cath on her plus wheeled Stooge. Cath rejected my first choice - locally known as "murder wood" after the body of a lady of ill repute was found there in the 1970s - no idea why she didn't fancy stopping there. So we carried on and made our way to close to the top of the hill. For a hill in the Pennines it's actually quite prominent and separate from the rest of the chain so it's pretty exposed. However, there's some old, shallow, quarry pits here, I'd used them for a bivy a couple of years ago when Cath was away skiing. The same spot I'd used before was out of the wind so up with the tarp.

It was only when we'd got bedded down and turned out the torches that we realised how bright the moon was (full moon in a couple of days) and with all the lying snow the whole area everything was well lit up. The main problem was that the pitch was on a very slight slope so we'd slowly slide out of the tarp! According to my thermometer it got to -7C while Cath's reckoned it was -8C, whatever, it was pretty nippy.

We were up at 0620 and packed away just as the first snow flurry hit. A bit of cheeky riding along the Pennine Way and then back home for 0730. Sorry no pics for this one.

We left it until even later than February but after work kiboshed getting away on Good Friday we headed up to do some riding based on the Wild About Argyll Trails. We set off from Arrochar on Saturday afternoon and ended up on a hillside above Loch Eck. We discovered during the night that silnylon bivy bags are very slippery and pitching up on even a slight slope has unintended consequences It was pretty cold, about -3C but that was March done. 3/3.

Sunday we continued and by the time we got to Tarbert on the Mull of Kintyre (cue McCartneys, Denny Lane and a band of pipers wandering along the beach) we decided to cut the route short and headed up the road to rejoin the return at Furnace. By this time it was a bit late so we bivvied on a flat spot overlooking the sea. 4/4. 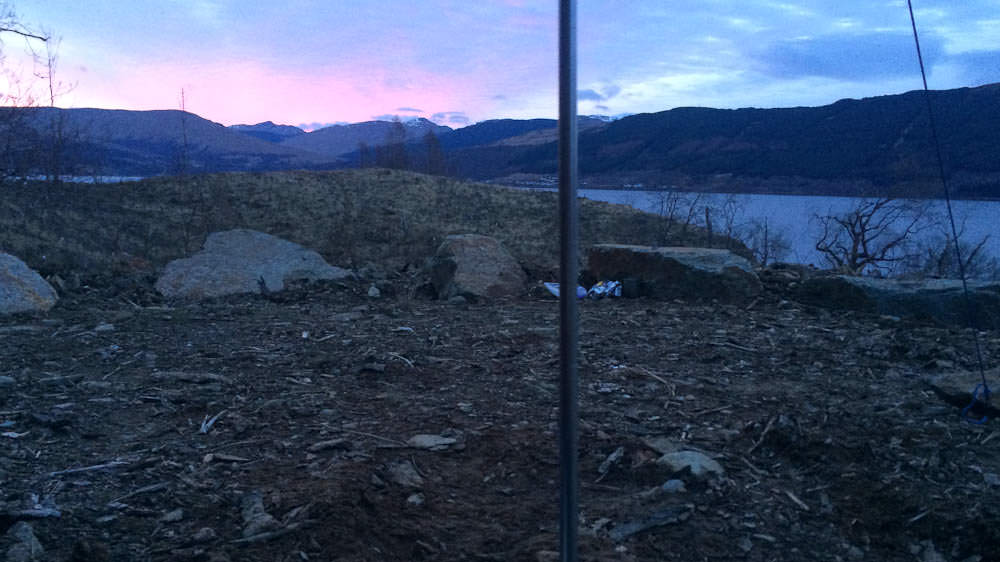 Got back to the car just under 48hrs after leaving. Didn't have any rain or other precipitation so a good choice.

We did our first Welsh Ride Thing and so got two bivvies for the price of one. The weather was brilliant all weekend. The first bivy was above Brithdir near Dolgellau whilst the second was on the shores of Llyn Vyrnwy 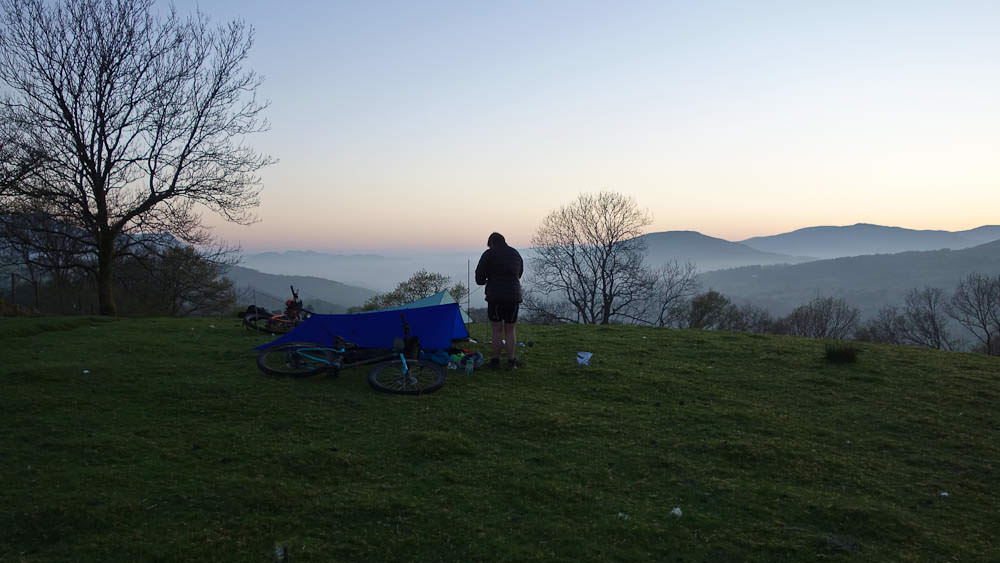 We went for a rather warm ride up to the north west part of the Dales. We followed the Pennine Bridleway but with a few short cuts. After a nice meal in The Moorcock Inn we ended up bivvying close to the Water Cut sculpture near the north end of the PBW with Wild Boar Fell across the other side of the valley as a backdrop.

The following morning we rode the very northern bit of the PBW over the shoulder of Wild Boar Fell before heading back home via Sedbergh, Ribblehead and Malham. 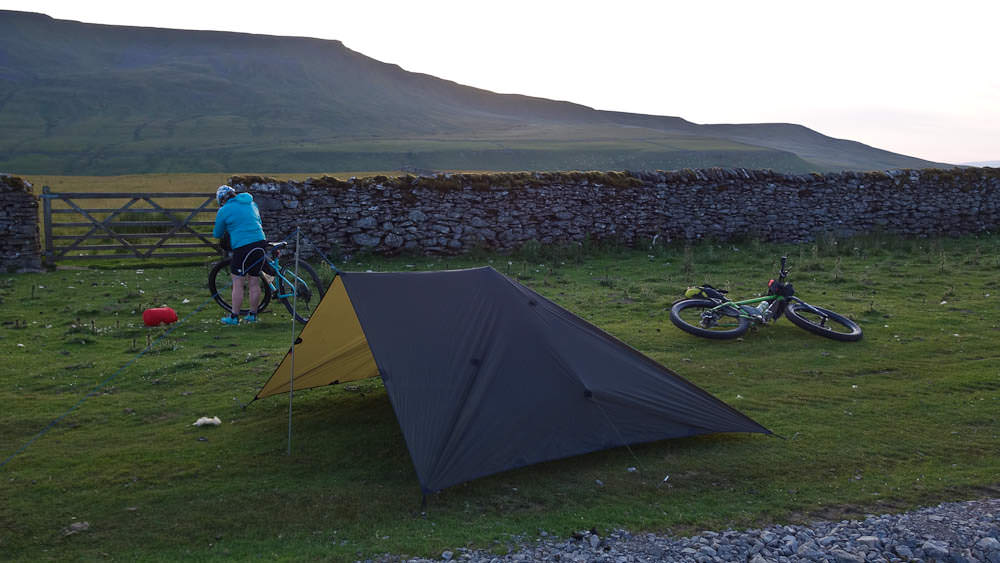 We went for a rather long ride this time, basically the Leeds-Liverpool canal to Wigan, the Bridgewater canal to join up with the Trans Pennine Trail then NCN 67 to Leeds before rejoining the LL canal to get back home.

We bivvied in Longdendale on the old railway line that once used the Woodhead tunnels.

We rose early, everything was bone dry - no condensation or ground damp. By the time we'd ridden the 6km to the tunnel entrances it was drizzling so good timing. 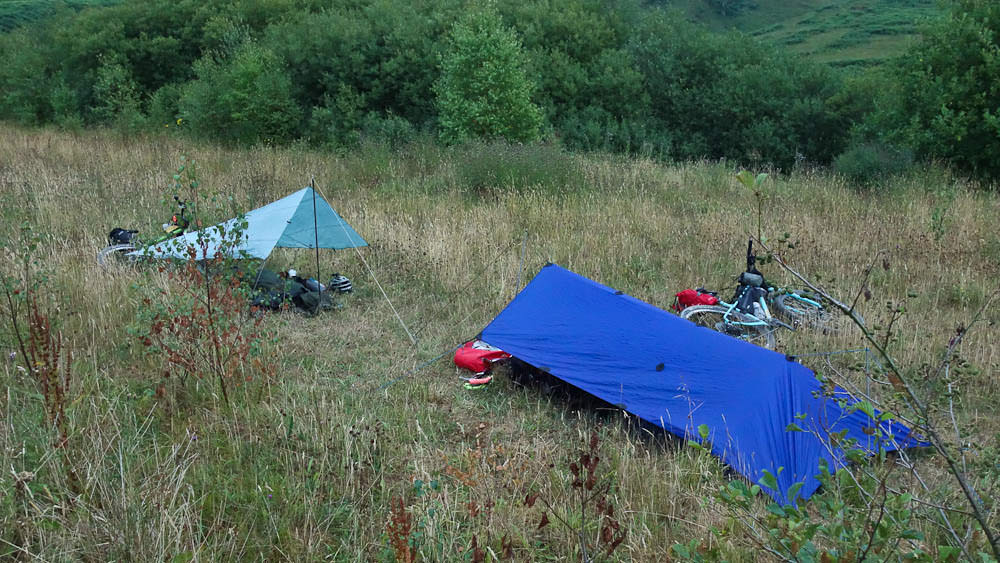 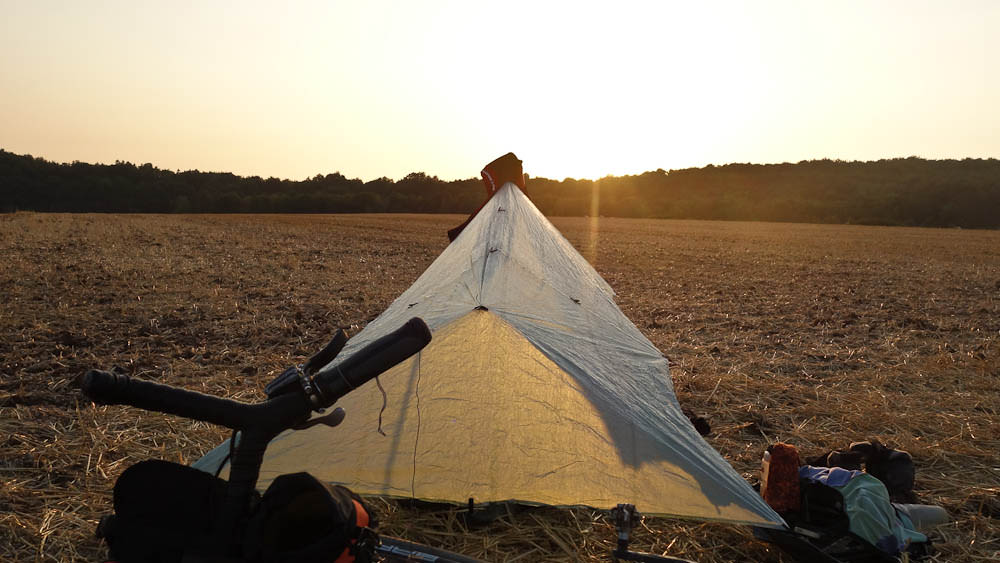 I had thought of bivvying up on the top of the moor but it was very busy with a group of twenty or so mountain bikers going the other way then a group of fell runners then it looked like a pair of trails bikers were heading along the track! It was also a bit early and actually blowing a bit of a gale so we carried on.

We headed up from Hetton and found an old quarry working that was sheltered and had some flat spots to put up the tent. This was our first BAM using a tent, it's new and Cath wanted another night out in it. Anyway, I found another use for the Schnozzle bag - as a diffuser over an Exposure Joystick. Cue stereotypical nighttime shot of a lit tent ... 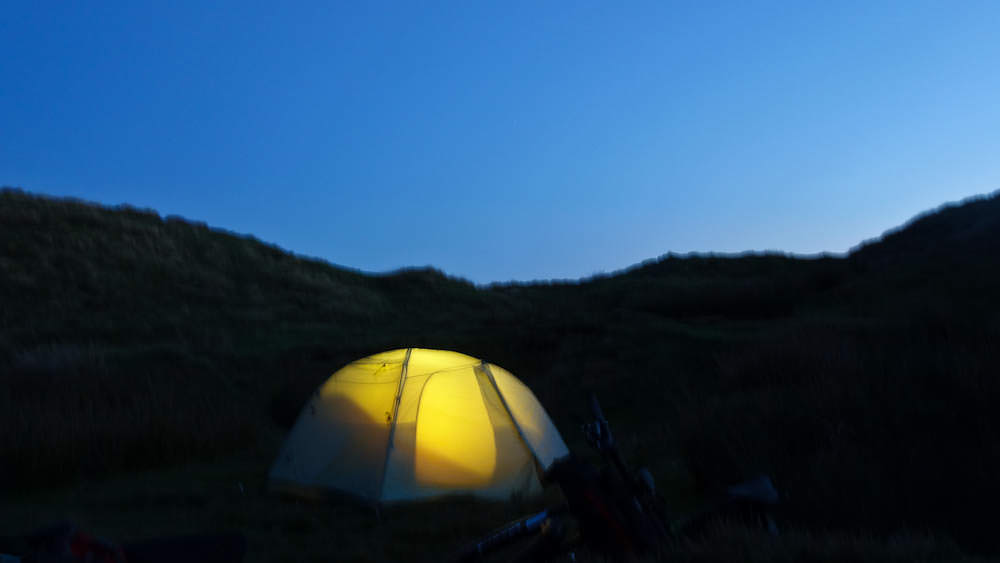 It rained through the night which wasn't forecast and it was a bit dreich in the morning. A quick pack up then it was down towards Threshfield, Cath headed to work while I headed home.

Another getting to the end of the month and what shall we do job. Cold northerlies meant somewhere sheltered. We e eventually settled on top of the local hill! This was the same spot as for the February bivy.

We headed out on our fat bikes which gave Cath a chance to try her new tyres. It was about -3C when we set out but warmed up a bit through the night to around or just above freezing this morning. We used the same site, some old quarry workings, that we'd used on our Feb bivy as they are reasonably sheltered. We used the new Pole-a-Bear poles we got earlier in the week from Stu along with a carbon pole he'd made for me last year. What we didn't realise was that they came out about 150mm shorter than our normal reused old tent poles so the setup wasn't quite right. 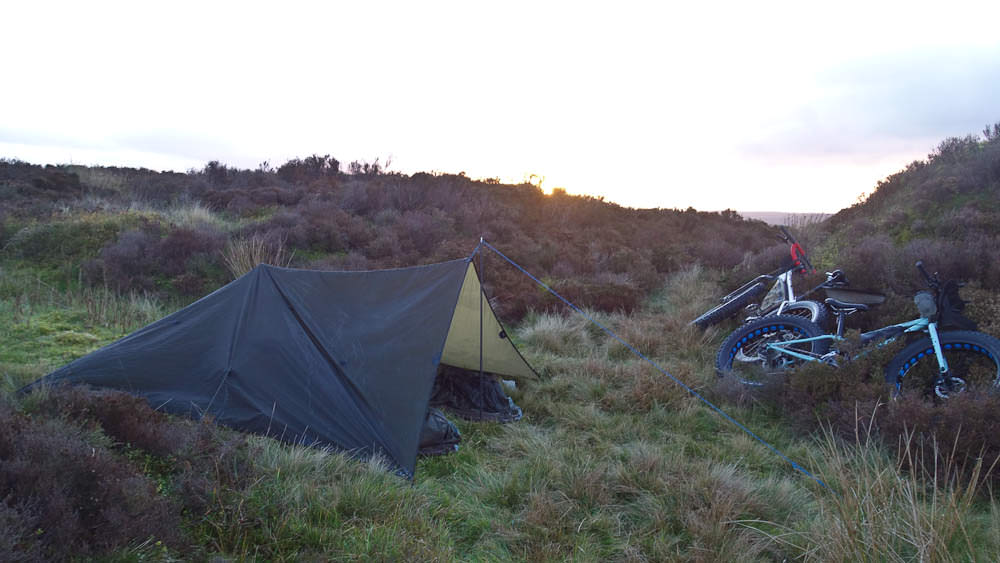 There were a few light showers through the night but it was definitely nippy in the morning with some frost on the tarp.

Got it in early this time. I persuaded Cath that the new tyres on her fat bike needed a proper ride so that they'd bed in.

With the short daylight hours timing was everything, we needed to get to the pub at about the time they started to serve food, a couple of hours there then off to wherever we would bivy. We left Buckden after midday and headed up on to Stake Moss then down via a new to us bridleway to Thornton Rust and then by road to Aysgarth where we took afternoon tea. Steady riding along the north side of the valley in ever increasing gloom and darkness got us to the pub in Bainbridge about forty minutes before food time.

Suitably replenished we left the pub at about 2000 and headed up the old Roman Road keeping a look out for potential bivy spots. After about a kilometre there was an open gate in to a flat field. Up with the tent. A couple of swigs of whisky and some snacks and we crashed out. 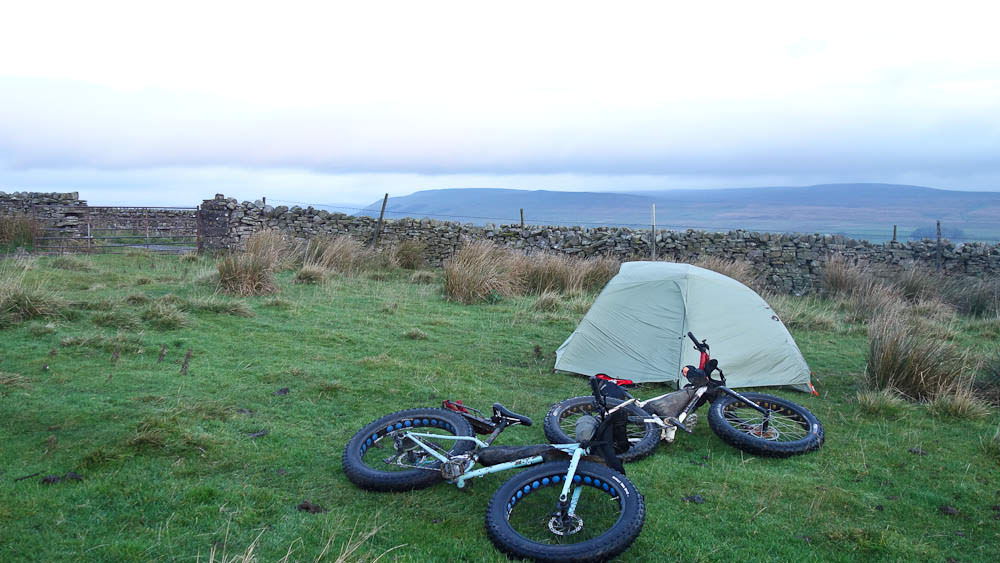 The morning was fine but looking a bit ominous so a quick breakfast then it was on and up the rest of the Roman Road and over Fleet Moss to Cam Head to drop down towards Ribblehead before cutting back through Langstrothdale forest. All the descent was in cold driving rain so by the time we got back to the car we were both soaked and frozen.

We chickened out of the BB Winter bivy, in the event it was probably just as well since black ice coated everything and it was difficult if not impossible to walk the short distance from the house door to the car! That meant our only real chance was our annual three day trip somewhere. We ended up in Kielder Forest visiting both Kershopehead and Flittingford bothies.

Most of the first day was really a night ride and in very thick fog it was a good job I'd put the route into the GPS to get us to Kershopehead. There were a couple of well oiled Carlisle lads in their already who'd already got the fire going. A steady day got us to Flittingford which fortunately was empty as it's very small. 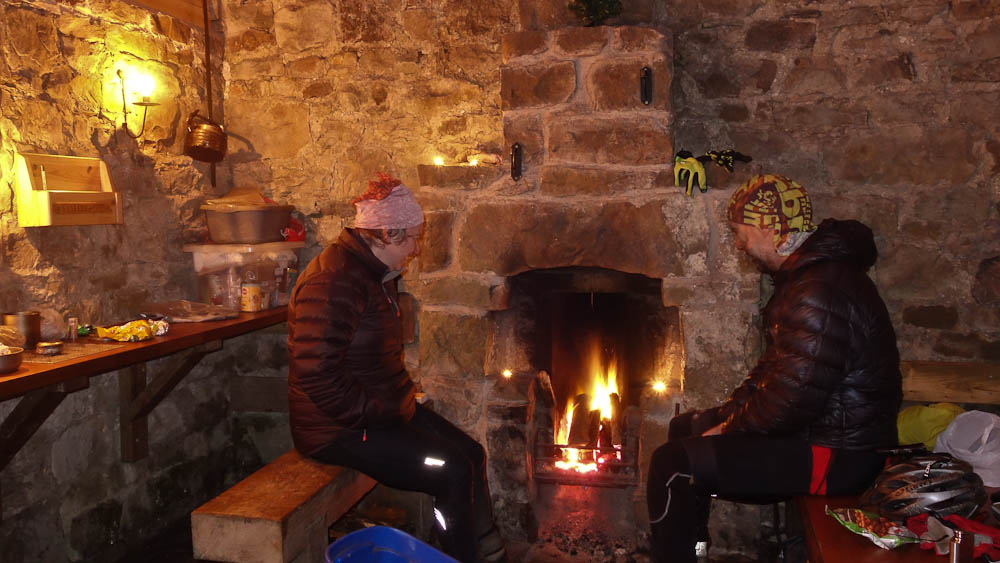 The third day was a straightforward ride back to the car on tracks we'd used before.

So that's a full year's worth of bivvies.

Posted by Bob Wightman at 18:49 No comments: