With the media predicting another national crisis - the mini beast from the east - for the weekend road riding was out of the equation. More fat bike action!

Cath had agreed to go on an all women's ride but there were a couple of blokes invited along so we headed up the Dale to Threshfield. It was all a bit nippy getting ready, even in the lee of some trees, but soon we were away.

I'd swiped Cath's pogies as they don't fit the bars on her Stooge. Unfortunately they don't quite fit the Mary bars either so although I used them today, I'll need some different bars in the future.

There was quite a lot of ice on the track leading up on to the moor but it had a rough surface so was easy to ride on. I'd put too much air in the tyres and was bouncing around a bit so let a couple of PSI out and things were much better from then on.


We got to the foot of Mastiles Lane just as the first shower hit. There was a discussion as to whether to head down the lane to the pub in Kilnsey but by the time we'd come to a decision (pub) it had cleared out so we changed our minds and headed up the lane.


Now I've only ever cleared the climb up the lane once, many years ago, but it was ideal conditions with all the usual loose material frozen in place so I just span away and crested the top without so much as a thought of dabbing.

Cath managed the steep part of the climb clean for the first time only to get blown off by the wind just before the very top.

A lunch break behind a convenient wall then it was round by Lee Gate Farm and back to Bordley. Of course as soon as we turned back in to the wind another shower hit. With no goggles it was painful riding, I could only look at the ground behind my front wheel and it was as much memory of where the track went that got me down to Bordley Farm.

No sooner than we had got out of the wind in the shelter of the buildings than the shower passed and the sun came out!


Despite the wind, the temperature wasn't particularly cold and quite a bit of ground and puddles weren't frozen. This meant that there were a few brakes and rear mechs that got wet and then froze up. We spent a few minutes dealing with Jo's rear mech after it jammed.

Finally it was back down to Threshfield. Normally on this descent I have to hit the brakes quite hard at certain points. Today it was a block headwind and you had to pedal downhill! Only 21km but those kilometres were hard won.

And the East wind doth blow ...

And we shall have snow
And what will poor bikers do then poor things?

Get the fat bikes out!

As our neighbour noted: "When you bought those (fat bikes) did you think you'd get to use them in this country?" Well we have done on occasion but it's been dribs and drabs TBH, this week was different. We'd got almost to the end of February and realised that we needed to get a bivy done to keep in the Bivy a Month challenge so on Tuesday night after we'd had our tea we headed out, me on the fat bike, Cath on her Stooge. We were only going very local so just packed what kit we needed into small rucksacks.

With the strong easterly we really needed somewhere sheltered but my first option, known locally as "murder wood" following the discovery there in the 1970s of the body of a lady of ill repute was rejected by Cath. Fussy! We continued on snow covered roads with my Van Helga tyres making a right racket on the hard surface. We ended up just shy of the summit of the local hill in some old, shallow, quarry workings. Just enough shelter to be usable. I'd used this spot a couple of years ago so knew it was OK. The only problem was that there was a slight slope to the site and with the wind in the direction it was it meant that if we slid around in the night then we'd slide out from under the tarp. Oh Well.

It was almost a full moon so with the lying snow it was very bright and you certainly didn't need a torch to find kit by. Things were enlivened during the night when one of us knocked one of the poles away and we took a few minutes to get a sense of normality back. I was using my bag and quilt combo whilst Cath was using her better rated quilt. I think it's safe to say that we both found that we were at the limit of what was comfortable for the kit. I recorded -7C whilst Cath recorded -8C, suitably nippy. Whatever, come the morning we weren't about to hang around so we were up and packing before our 0630 alarm went off. It was cold enough that we kept our duvets on as getting back home was nearly all downhill.

It was just as well we got the bivy that night as the following day The Beast from the East (as our press liked to call it) or Thursday as it's known to the Finns, arrived. I chickened out of biking into work, it turned out I'd have been the only person in the office anyway as no-one else got in. I had to dial in to a video call but that could be done from anywhere, most of the day was spent keeping the wood stove going. We were still blocked in on Friday so that was another "snow day" and another conference call. I'd noticed a knocking in my headset and couldn't fix it - the top bearing had collapsed so a quick phone call to Stuart Rider to check he'd got the appropriate bearing ("Is it the 41.2mm or the 42mm version?" - typical bike industry and their standards) so head into town to get it fixed. 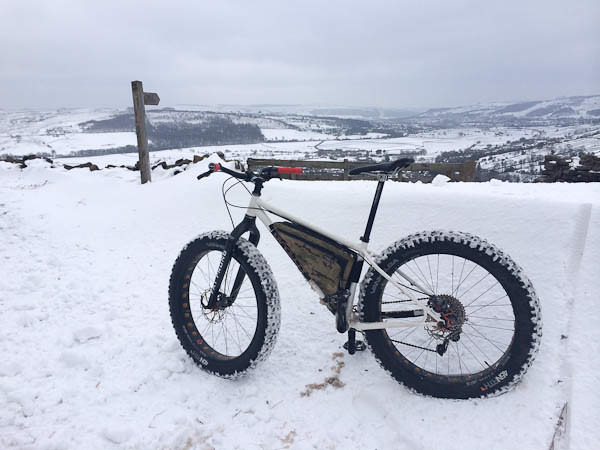 It comes to something when you have to wear full on winter mountaineering kit to ride a bike but I was wearing a full set of Paramo salopettes and jacket just to keep the wind at bay. No drama except for two incidents: I came across a council grit spreader stuck in a snow drift (didn't take any shots as the guys weren't happy and they had big shovels!) and whilst negotiating said drift I sprained my already sore back. Bummer! Headset sorted there was no problem getting home.

Come Saturday and it was going to be something local again. We worked out a route that used a mixture of mostly roads to gain height and mostly bridleways to lose it that looped in and around the hills. If things started to get out of hands then we could just use the roads to get back home. So back up the mostly cleared road up to Murder Wood (not dropping any hints dear, honest!) then a short bit of bridleway that I'd never been on before. Cath said it was usually boggy but with the cold and snow it was fine, just the odd drift as you rode across a sloping step and the back wheel would give way or coming to a comedic halt as the drift ahead deepened. 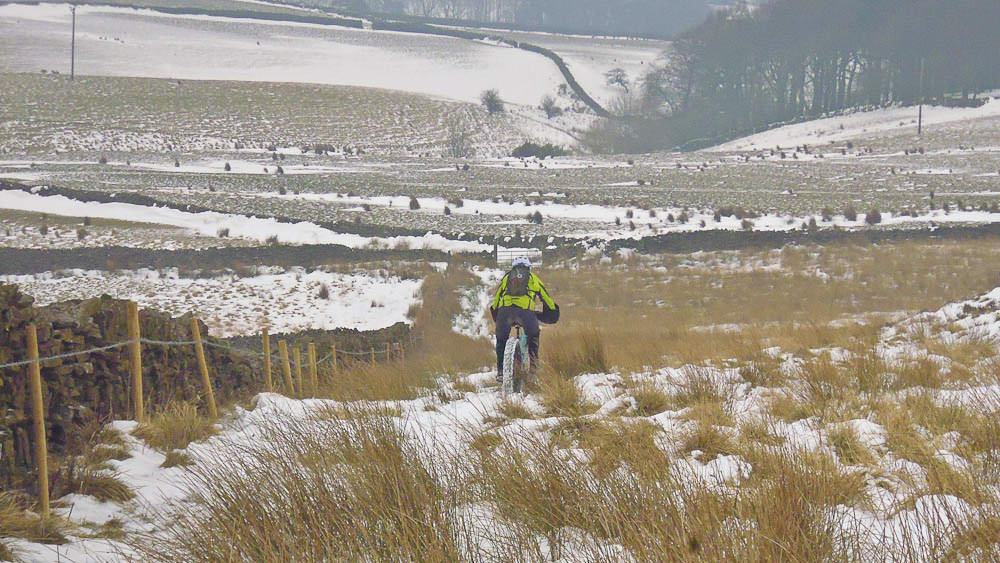 A quick dog-leg on the next road and then it was more bridleway, this time through heather and a mixture of pushing and rideable. Soon the gradient headed down and we could ride for longer sections. The next bit was tracks and fields to get us down to the old Skipton to Colne railway track. There were some good snow banks here that were firm enough to ride down, great fun. 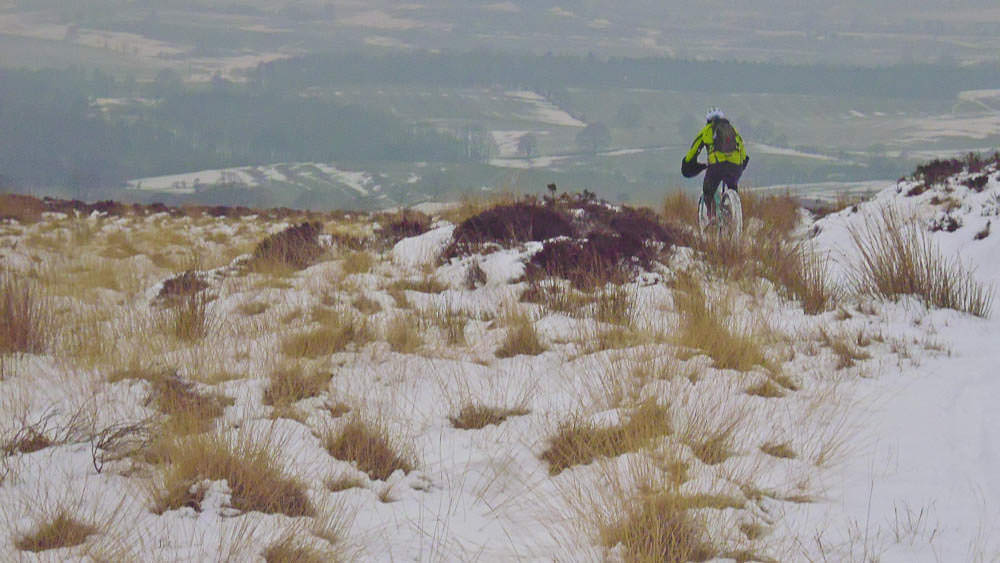 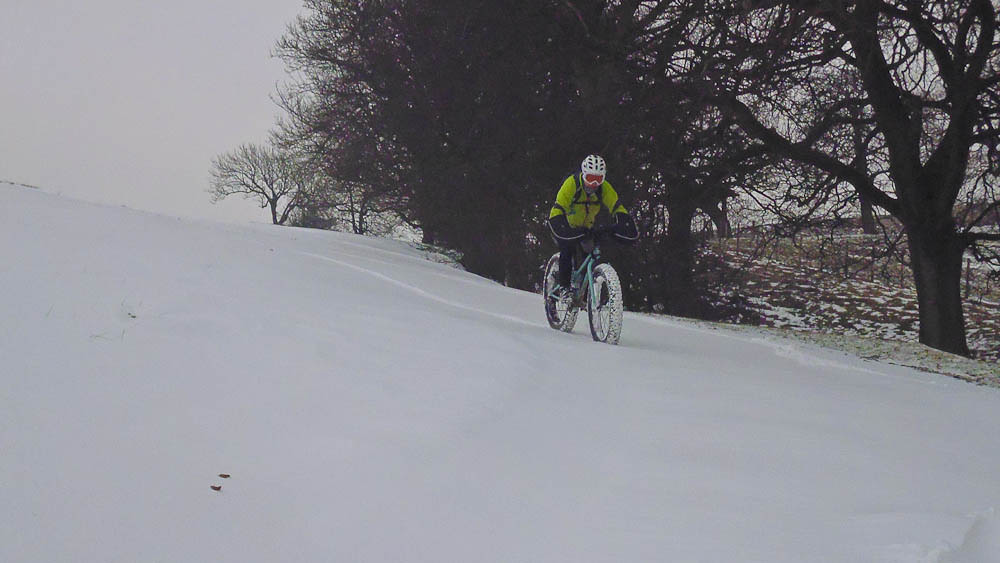 This bit of the track is used by a "Land Rover Experience" setup which in practice means puddles, not nice in winter so we'd wind on and off the old track bed trying to keep our feet dry. The next bit of track is now access road to a farm and easy going. What we came to next was the result of one person clearing the road from one end "as far as possible" and someone at the other end clearing the road "as far as possible". We were just left with "possible", except it wasn't. A couple of hundred metres of steeply drifted snow. Hmm. 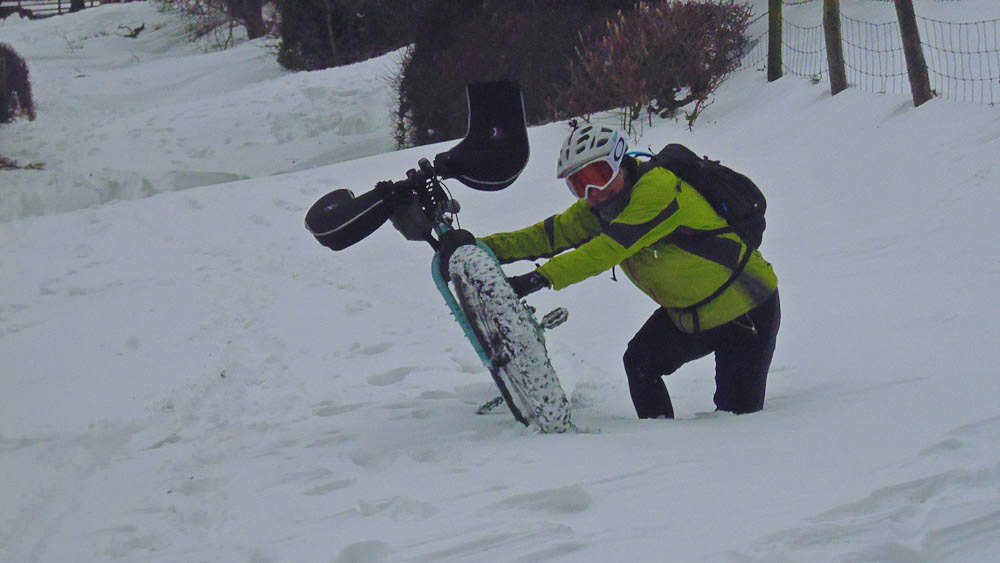 Next the big climb of the route. First bit on road (part of my preferred road ride route home) then some cheeky riding through some woods to the top road. Cath managed to clean the first of the steep ramps of the route through the woods for the first time. 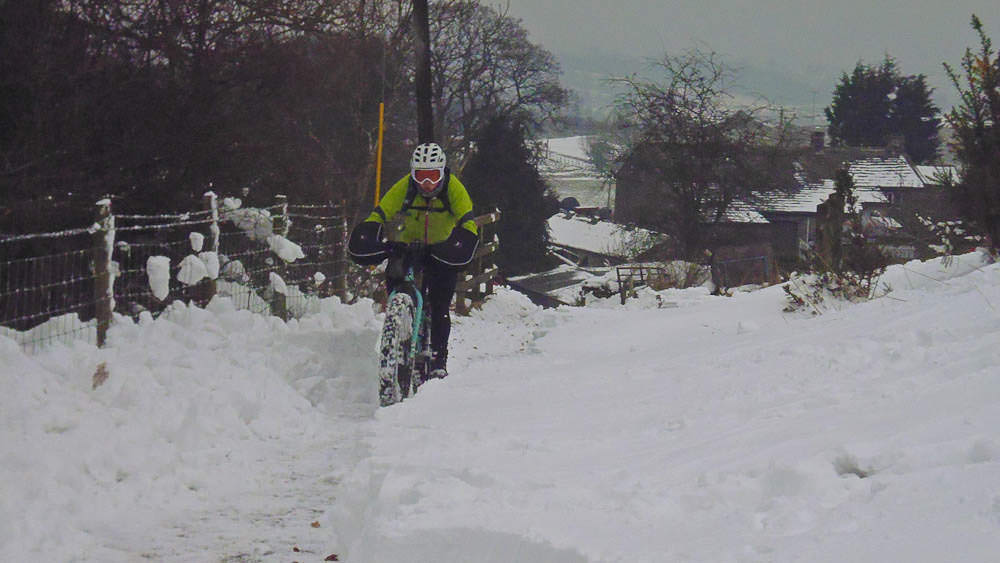 We'd got into the woods and spinning steadily away when I got the feeling that the bike was handling differently. The back tyre was nearly flat. The thing was, in the snow it gave brilliant grip so I thought I'd leave it and see how I got on. Pretty well as it turned out so once at the road I pumped it back up hoping that the (fifteen month old) sealant would do its job. 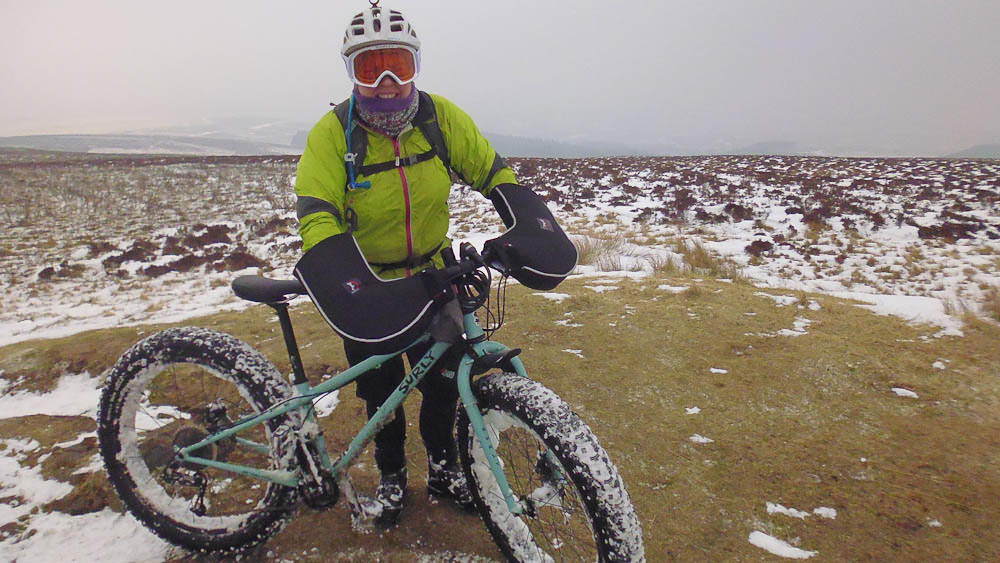 Another bit of cheeky riding ensued, well it would have been riding if the track wasn't a metre deep in snow! We'd ridden this bit getting to the bivy the other day but now it was twenty minutes of hike-a-bike. Our bivy site looked quite drifted in, a change in  wind direction had scoured some parts of the hill and deposited everything here. You could see our tracks from Wednesday pressed into the now bare ground. No time to hang around at the summit, the wind was biting, down the same descent as Wednesday but on lightly drifted ground not 30cm deep snow.


Lower down the snow was again in a completely different configuration to earlier in the week and we got to the next road to find that my tyre was semi-flat again. Another re-inflation and we decided just to head back on the road, the next bridleway looked drifted in.