So a week in Scotland and I'm feeling rather tired! Nothing compared to Steve Pyke and his mammoth Munro run though. The idea had been to get some Hard Rock ticks done as well as some lower level cragging. In the event, things didn't quite work out that way.

Our first objective was Creag an Dubh Loch in the Cairngorms, so a two hour blast from the Spittal of Glen Muick got us to the foot of the crag only to find that both our intended routes were very wet. Obviously the winter snows have taken longer to melt than normal, there was some snow still lying in Central Gully. So we headed up on to the plateau and bagged Broad Cairn before heading back to the car and then over to the west coast.

The next bit of the plan was to visit Carnmore, possibly the remotest major crag in Scotland with a 10 mile walk-in, and attempt the two routes there that are in Hard Rock plus a couple of others. Weighed down with suitably heavy sacks we plodded in, set up camp and climbed the classic VS, Fionn Buttress. 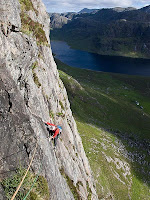 I reckon that this would be a bit of a shock if you only led VS as it has some seriously committing climbing. It is absolutely brilliant though and it was 10pm when we topped out. 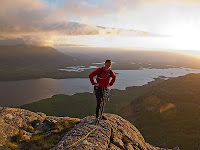 The following morning another team had the same plans as ourselves so as it was a little cool we thought that we'd give it some time to warm up and we headed off to bag a couple of Munros. Actually the two are reckoned to be the remotest in the list with a complete round trip being some 40Km. An increasingly interesting ridge led to the summit of A' Mhaghdean with its fantastic panorama over the Fisherfield Forest. Ruadh Stac Mor was easily ticked off then back to the crag.

The other team had only just finished the route on the lower tier so we decided to head up Black Mischief to get to Gob on the upper tier. Three pitches of varied climbing got us to the foot of the central bay then another two full rope lengths over very insecure, and steep, heather got us close to the start of Gob. By now it was cold again and I was somewhat spooked by everything so we bailed out up the original route of the crag. Again it was late, 9pm, so possibly just as well we didn't decide to do Gob. On the descent we disturbed a Scottish wild cat, the first I've ever seen captive or wild.

The next day was wet so we walked out and went cragging by the coast. Either the grades were wrong or I had suddenly become much better by not doing any climbing! There followed a couple of days visiting various crags which included doing one of the best HVS pitches I've ever done (Bald Eagle at Stone Valley Crags).

By then it was time to head south but we split it by stopping overnight at Blair Atholl then a little bit of sport climbing at Weem Rock on the final day.

I'd forgotten just how far and big the Scottish hills are and was seriously knackered on the way out from Carnmore with pretty low sugar levels from not eating enough. Walking in to the crags the following days felt easy in comparison with having a much lighter sack though I may have even convinced myself that I was fitter. Ultimately though, ten minute walk-ins to 15m sports crags is not good training for big mountain routes even if those routes are technically far easier.
Posted by Bob Wightman at 20:15 3 comments:

Having finally recovered from the heat of Nicky Jacquiery's BGR, I was out in the Lakes the following weekend recceing leg 1 - the Skiddaw - Blencathra section  - in preparation for supporting another contender (who at this moment doesn't wish to be identified!).

Let's just say that it was hot and that I didn't take enough water. After parking up at Threlkeld (best to have the car ready at the end of a run not back at the start) I cut round to the car park at Latrigg and headed up the main path to Skiddaw. I was soon sweating like a good 'un and it felt continuously hard work. After a detour to Skiddaw Little Man which I had never visited before it was on to the main summit and then out in to the wilds of Back o' Skiddaw.

Except that now it wasn't! The increased popularity of the BGR combined with larger support parties has lead to what was once a very faint path at best into a fell motorway that is visible from a couple of miles away. There is little point in avoiding the "right" line since no-one is going to go through waist deep heather to avoid using a path. The well-worn trail continued up Great Calva making the subtle lines that I had previously used pointless. The improved ground underfoot meant that even in my unfit state I was ten minutes quicker on this section than I'd ever been.

From Great Calva I looped round by Skiddaw House to check out a potential line that had been mentioned on the FRA forums. In my current state it was about ten minutes longer than the direct line to Blencathra. Then the highlight of my recce - what is becoming known as the "Parachute descent" from Blencathra.

I think it was first used by Billy Bland on his record round when he took just 14 minutes to descend to Threlkeld! It was rediscovered by Yiannis Tridimas and has been used by one or two recent contenders. Let's just say it is steep, dropping over 500m in less than a kilometre! You definitely need good studs for this.  It drops from just West of the summit to cross Middle Tongue via some easier angled patches and sheep trods before following the beck in the gully bottom to come out by the fell gate.

Back at the car I was exhausted so it was in to Keswick to grab a new climbing sack then ice cream and home. It turned out that I had lost nearly 4Kg through sweat during the day! Not good, I should know better.

The following Saturday, I entered the Duddon fell race - the long one, all 18 miles and 6000ft of ascent of it! Will I never learn? This was only my second race this year, the Wadsworth trog in February was the first and again it was a hot day. My first goal was to finish (always a good start!) and hopefully get round in under five hours.

It was going to be a trial by oven. Just over 180 grouped up on the start line for the mandatory inaudible safety instructions and then we were off. The initial part of the race is on a good track before heading through forestry and out on to Harter Fell, at least on the fell you had a breeze to help cool you. Morgan, a club colleague was about a minute ahead at this point with another Ilkley Harrier, Jonathan, somewhere in the multicoloured dots in the distance that I assumed were runners. A long fast stretch to the summit of Hardknott Pass then up to the next checkpoint before a big descent in to Moasdale and the biggest climb of the day up the inappropriately named Little Stand. I caught Morgan up just before the checkpoint then somehow got passed him on the long traverse to the Three Shires Stone.

In common with the other Lakeland long races the Duddon has cutoff times at each checkpoint but I was nearly an hour inside the time. Things were looking OK. Except they weren't - almost immediately after leaving the Three Shires I began to feel sick and the long drag up to Swirl How seemed to take an age, even on the flat and downhills I was having to walk an increasing amount of the route as my right knee was beginning to lock up. It didn't help that I had lost the group I had been running with so there was no pressure to keep up with anyone. Water offered by a spectator near the Dow Crag checkpoint helped and the long grassy run out to White Pike was helped by trying to keep up with the runner that had just passed me. A good line on the descent from White Pike was negated by having to walk the rest of the way to the final checkpoint on Caw. Unbeknownst to me, Morgan was now rapidly gaining time on me and we passed on the out and back to the checkpoint. It was the spur to try and run to the finish where the boggiest bit of the course awaited just outside the finishing field. I finished just outside my target of 5hrs. Pint needed!

Yesterday I was back in the Lakes again to recce leg one of the BGR, this time with the contender I would be pacing along with another contender. Fortunately it wasn't as hot this time plus I drank properly. One look at the Parachute descent and the contender indicated that it wasn't for him so we headed down Doddick Fell. This isn't the normal descent, that is Hall's Fell which drops directly from the summit, but it is more runnable even if it is a longer distance since you head east to pick up the ridge then have to traverse back under Hall's Fell to get to the gate. It took us just four minutes longer than the Parachute descent but perhaps more importantly it wasn't going to be something weighing on the contender's mind. Surprisingly we were over an hour quicker than I had been just two weeks previously plus I wasn't as tired.

Little climbing done in the last couple of weeks but I'm off to NW Scotland in a few days, hopefully we'll get in to Carnmore as well as other good places. I'm looking forward to it.
Posted by Bob Wightman at 11:49 No comments: