A long intense day at the weekend. Headed up to Glencoe around Saturday lunchtime via taxi, train and lift (with Chris Armour) to help out with Bill Williamson's Ramsay Round attempt. Despite the forecast being for reasonable weather until the early hours of Sunday morning we got low cloud then heavy rain around Loch Lomond and then most of the way to Glencoe. Things weren’t looking good.

Nothing had been heard of how Bill was going until the support team arrived back from Fersit: “Fifteen minutes down but feeling strong and going well”. So after generous helpings of cake from Wynne, four of us headed out to the ruins at the eastern end of Loch Eilde Mor. The rain had eased but even so it was still full waterproofs as we walked up the track. Surprisingly the wind was very light to non-existant, not good for midges, well good for midges, not good for their supper – us!

An hour and forty minutes later and the ruins were in sight. More clothes on to try and keep warm then it was just a matter of waiting, he was due to arrive at 0210. Several pacings up and down the track later and a set of lights appears. By the time they get to the ruins it is 0245 so he has lost more time. Bill’s quite bright though – there’s slack in the times for the Mamores section. 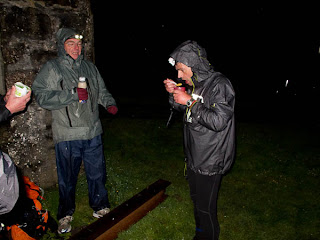 Ian and Bill at the ruins at Loch Eilde Mor
Suitably refreshed and we (Bill, Ian Charters and myself) are off up the rough hillside of Sgurr Eilde Mor.  Bill’s line is a rising traverse to meet the path up the south ridge. When we get there I elect to skip this top and meet them at the stream crossing before Binnean Beag. The wind is picking up and by the time I see their lights on the summit the first signs of dawn allow me to see the clouds scudding past. Together again we make good time up the path to the col between the Binnean peaks. My turn to accompany Bill to the summit. The rain makes the quartzite rock very slippery and we both slide a few times. Before too long we are heading back down and heading for the higher Binnean Mor.

Bill prefers the direct approach which looks unlikely to say the least. It’s actually quite straightforward, slightly harder than something like Hall’s fell on Blencathra but not as exposed – well we can hardly see anything to make a call on the exposure! Halfway up Bill finds a camera – so we stuff it in a sack and carry on (later I turn it on, it works and still takes photos!). The ridge suddenly ends around 50m from the summit. No time for photos though as the storm is building. The traverse to the twin topped Na Gruagaichan is much faster than last year but the wind is building in strength.

As we drop into the gap between the two tops, the wind is so strong and gusty that I have to hold on to Bill to stop him getting blown away, Ian is on all fours. We head on over the west top and suddenly the pace drops. Bill has decided it isn’t fun anymore. Down at the col the support team reckon that he can just make it but it takes quite a bit of persuading to get Bill going. Ian and I now head down with half the support while Chris and Karl set off for the next peak to see if the wind is going to pick up or abate. After just a couple of minutes standing around and we are frozen due to our extremely damp state and the wind. Once back down at Mamore Lodge there is hardly any wind at all.

Back at the house being used as a base it is all we can do to wait for news. Eventually we get a call – he’d abandoned after another two peaks with too much running to do in the time left. Luck plays a large part in these rounds and Bill just didn't seem to have any - after weeks of dry fine weather, the weekend of his attempt turns out to be wet and windy. Very impressed with just how far he got in the conditions. With his current level of fitness and better luck with the weather he’ll get round in time.
Posted by Bob Wightman at 17:52