Dipping a toe in the Single Speed Kool-Aid

A couple of years ago my commuting bike, an On-One Pompetamine, died. It had an 11spd Shimano Alfine internally geared hub which had never been entirely sound (I believe that the 8spd is much more reliable) and one day on the way home from work I ended up with just two gears. Or three. Or two. I ended up buying a new bike and I put the Pompy into storage with the idea of converting it to singlespeed to get more use out of it.

Well, it sat there untouched for two years apart from a raid to get the front wheel with its dynamo hub and associated front light to put on to the new commuter.

Finally I decided to sort it out. A bit of interweb shopping for a suitable rear wheel turned up nothing. The bike has disk brakes and getting a disk compatible road rear wheel on its own isn't easy, at least one that's cheap. A final look around and I came across a wheel set on On-One's site at a reduced price of £70. In fact the pair of wheels were considerably cheaper than any single rear wheel I could find. Welcome to the crazy world of modern product pricing. At 2.3Kg for the pair they aren't exactly light but at the price I'm not really complaining. There was also a singlespeed conversion kit available for a tenner so that got added to the order.

With wheels sorted I just needed some tyres for them. The local bike shop had some 28c tyres which should be comfy enough. £23 each. I've plenty of inner tubes lying around the place as well as a pair of 160mm rotors.

So what was I starting with? This:


Current weight is 12.3Kg without pedals (weighing method du jour apparently), the Pompino/Pompetamine frame is, shall we say, sturdy and it's quite likely that a modern steel frame like a Cotic Roadrat would be quite a bit lighter - actually more than likely as my Cotic Solaris 29er mountain bike weighs 11.5Kg.

First job was to strip the kit off that I wasn't going to need: old wheels, cabling for the Alfine. I could have replaced the Alfine Crankset but it still works OK so I'll keep it for now even though the associated chain guard isn't particularly "on message". Similarly for the brake/gear levers.


That's it! Took about an hour, most of which was building up the wheels as tightening rotor bolts is just fiddly and getting new road tyres on to rims can be frustrating. The wheels didn't come with rim tape and the only rim tape in the LBS was for tubeless and expensive so I ended up using Gorilla Tape. The next longest job was getting the chainline right though it turned out I'd actually fitted it correctly to avoid losing the parts, reset it at a "guess" then had to change it back. The new weight (with pedals) is 10.8Kg. Total cost of parts was £133 but if I'd already had compatible wheels, i.e. the rear wheel was a standard freehub design, then nearly all that could have been avoided and the cost would have been the mighty sum of £10 for the singlespeed kit and £7 for a new chain.

Actually there was another job: the bike had stood for so long that the rear brake cable had seized so a quick trip down to the nearest bike shop procured some cable and outer for £9 and a bit of fiddling and fettling and that was all good. All that was another hour! Here's the result. 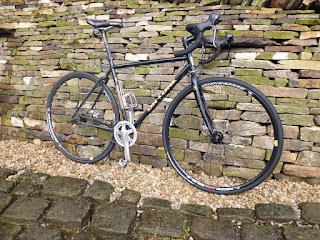 I just hope that my chosen gearing of 39:16 is about right, it's roughly 65 gear inches. I ended up with this due to keeping the crankset, I'm aware that many recommendations for singlespeed are along the lines of 44:16 or even 48:16 but there's some steep hills around here and the idea is to be able to ride things!

First ride out was up the dale which is fairly flat (for round here) having just 850m of ascent in 55Km. The climbs, such as they are, cover just about all gradients so a reasonable test. My max speed when pedalling was 44kmh which with a bit of reverse maths apparently comes out at a cadence of around 140rpm! I hadn't tightened up the rear QR enough so on the way back the wheel slipped in the drop outs and the chain dropped. I tightened it up and it held for the rest of the ride but I should get either a steel QR or bolt through to prevent this happening though another possibility is something like a Surly Tuggnut. The spacers on the conversion kit weren't quite enough to keep everything tight so that needed looking at, I'd a 2mm BB spacer that did the job by replacing one of the 1mm spacers.

The second ride was a bit hillier. OK, not entirely accurate as there was the same elevation gain but the profile was completely different with a big hill at the end of it with sustained sections of 12-14%. That was hard work and I only just made it past the steep bit at the end of the longest ramp.

In total I've spent £142 and about 2 1/2 hours on the conversion. It's not a bike that will do everything road related, it's just too hilly round here for that, but as a winter hack/training bike it'll be fine. If my experience with 1x systems on my hardtail is a guide then in about a year I'll probably get a higher gear fitted.
Posted by Bob Wightman at 19:31