2018 has been a somewhat frustrating year, I'd scratched on the first day on the HT550 and on the fifth day of The French Divide so I was a bit down about things. We'd toured Brittany after scratching on the FD but if I'd completed the FD then I doubt I would have considered riding this year's YD200. As it was I thought I'd be OK so rang Stuart on the Friday to see if there were any spaces.

"There's only eight due to turn up! A few who registered have emailed to say they can't make it."

Which meant I had to get the bike ready. But I'm a dab hand at this now. The forecast was fine and cool (hurrah!) for Saturday with rain coming in on Sunday morning. Riding through was the obvious tactic but I'd pack a lightweight bivy system that I've used before: SOl Escape bivy and a PHD lightweight duvet. Along with a windshirt for possible trail use it came to a mighty 600g! An Alpkit Top Tube bag mounted in the frame behind the bottle cage held tools and spares, the pump was strapped to the bottle cage, and two Revelate Feed bags for trail snacks and odds 'n' sods. Pretty lightweight but some did have even less.

Up early and ride into town. Yep, just eight of us. I knew, in varying degrees, four of the others, ITTs are a small and apparently shrinking world. One of those I know is Phil Clarke who I'd ridden with on last year's HT550 and who I'd last seen at Corrour this year when he gave me an inner tube for my busted rear wheel. Returning that we had a chat then Stuart gave his usual pep-talk and soon it was time to go.

I led the small group out of the yard and towards town, that certainly wasn't going to last! Soon enough the front runners are off in front. Let them go. Most of Stuart's rides finish over Barden Moor but this started that way which isn't that usual for me to ride. It's a long drag to the summit especially with the head wind. Soon enough we are dropping down to Rylstone and heading up to Bordley.

The front two (Tom Bruce and Phil) are well ahead but there's a group of four of us riding at roughly the same pace so Mike, George, Ian and myself spend most of the next few hours riding together or as various pairings as our strength ebbs and flows. There's quite a bit of surface water on Mastiles Lane, evidence of Friday's rain, nothing's particularly boggy or muddy though and we keep pressing on.

The Saturday of the August BH weekend is Malham Show Day which has an associated Trailquest meaning that as we pushed westwards towards Settle we'd cross lots of bikers with map boards mounted on their bikes as they rode around picking up controls and points. There was one part of the route that I'd not done before, at the time I thought it was a footpath but checking the map afterwards it wasn't even that, definitely cheeky! 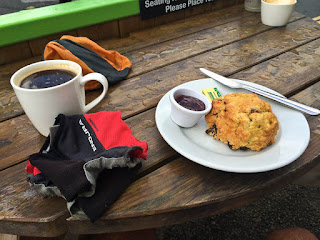 An agreement was made to have a coffee in Settle then the first of the hard climbs, it's in the 100 road climbs book, where Mike gets a bit of lead on the rest of us before a rapid descent and some nice BW around Wharfe. Lights on for the descent through the tunnels at Clapham and we pop out of those to find Mike dealing with a blown rear tyre.

The next bit to Wray is all road but it's lumpy. There's just George and myself at this point and by the time we get to Wray we could do with refreshments as there'll be nothing until we ride back over the Roman road across Salter's Fell to Slaidburn. The pub is convenient and a drink and ice cream do wonders. Steep road before an equally steep drop and climb back out lead to the end of the tarmac. The first part of the track is a good surface but it deteriorates after a gate, presumably an estate boundary, then again after another gate. 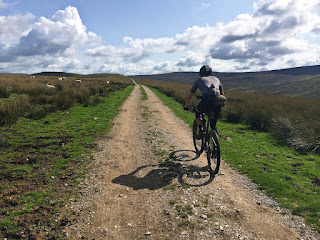 We almost gate crash a wedding on the way in to Slaidburn where we meet up again with Ian. We've just about finished our coffee when Mike arrives - George and I thought he'd passed us when we were in the pub but fixing his tyre had taken longer than anticipated. As we pass through Gisburn Forest he nips off to the cafe/shop to see if they have inner tubes for sale.

There's short sections of one of the marked routes we need to follow and I'm reminded why I don't like trail centres. Ah well, at least it's over pretty soon. Unfortunately as we climb through the forest I get the early signs of cramp and George and Ian leave me behind. Nothing to do but ease off and pedal through it. At least there's a long bit of generally downhill road next. One climb up to above Settle then a bit of bridleway I'd not done before and then I'm in town.

George and Ian are sat outside the Co-op, I nip in and grab what I need. I leave five minutes after them and won't see them until the finish. I normally manage the climb on the Settle Loop out of town but the cramps force me to walk some of it - at least I clean one of the rocky sections for the first time.

Once on top it's easy going as now there's a tail wind. Most of the puddles on Mastiles Lane have gone, in fact one beck that we'd avoided on the way out because it was so deep was now almost dry. With lots of interlinked loops in the route at this point it was possible I'd see the front riders and so it proved as Phil and I met at a gate. A quick chat about timings and we head on. I'd enough food to not need to visit the Spar at Threshfield but I needed to walk the steep tarmac back onto the tops. Down to the foot of Mastiles then start heading up again.

Mike catches me at this point - he'd stopped for something to eat at Tosside - as we get to the steeper top section we both get off and walk. The moon is just rising and we both stop to take a shot. Once on top it's nearly dark and the wind feels keen so on with the arm warmers and press on. I switch my lights on just before Lee Gate farm, no point in risking things. 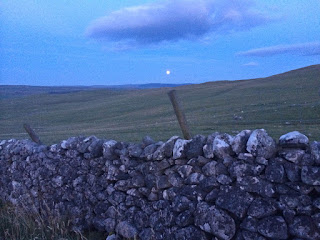 There's just one short steep climb to Weets Top and as the cramps come back Mike pulls away. I'll be on my own to the finish. The descent to Calton is a blast in the dark. I text Cath to let her know my expected finish time and polish off the road section to Bell Busk. Just Markhouse Lane, the canal towpath and the old railway track to do.

I've done bits of the old railway track where the Land-Rover experience use it but not the section heading back to town. The pools looked particularly black tonight, well worth avoiding. The "new" bit starts off as double track but slowly gets less and less well defined until soon you are on a path riding through bushes. There's no lights to indicate where I am but all of a sudden the angle goes downhill sharply and I debouch onto the road. Just TT mode back to the finish.

I finish just before 11pm having taken just under 15hrs. Phil and my three companions are there and we chat for a while before it's time to head home and get some kip. The fastest time was 12hrs22mins.

Overall not a bad effort. I could still feel this summer's efforts in my legs, in particular there's no real top end power and sustained tempo is a bit lacking - going up long draggy hills I'd invariably drop behind whoever I was with.
Posted by Bob Wightman at 19:27