A couple of years ago I built up a Singular Puffin fat bike for the Rovaniemi 150 bike race. My first fat bike, it would take a little getting used to and there was a good chance I'd have to modify one or two things.

One of the things that I definitely didn't get right during the Rovaniemi was tyre pressures. I made the classic newbie mistake of running too high a pressure so struggled when the snow got softer. I'd fitted a 28T chainring but since I've rarely used the 11T cog I thought I'd drop down a couple of teeth so ordered a 26T oval chainring and fitted that. Bling gold so I can tell it apart from the 28T version!

On a ride a few weeks later I  noticed a crunching noise when in the 42T cog. Bike up on workstand to see what's going on. It turned out to be at the chainring end. There were two BB spacers on the drive side and one on the NDS so swapped a spacer from the drive side to the NDS thereby moving the chainline inward by 2.5mm and it was sorted. There's still plenty of clearance between chain and tyre. 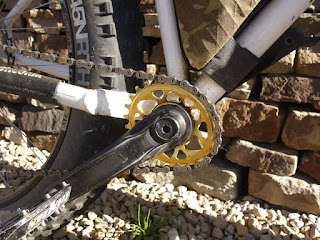 A weekend in the Lakes doing some rather steep stuff led me to realise that the brakes (Avid BB7s) were a little underpowered so I moved the 180mm rotor from the front to the back and added a 200mm rotor to the front, except ... Hope rotors don't play well with Avid brakes - the tabs on the pads foul the "rivets" connecting the inner part of the rotor to the braking surface. The easiest solution was to cut the tabs down. It turned out to be the one practical solution I later found when searching online.


At the time I noted that I'd take time to get used to the handlebars. Earlier this year I built up a Salsa Spearfish and rather than buy a new set of Jones Bars I moved the bars to the Spearfish and put some On-One Mary bars on the fat bike. The Loop Bars felt right on the Spearfish so it obviously wasn't the bars themselves that were the problem but I put things to one side and got on with riding and generally doing stuff. As it happened the Mary Bars didn't feel right either so time to have a ponder and mull things over.

It dawned on me that Ian, the previous owner of the Puffin, was a little shorter than me so he'd have cut the fork steerer to suit him. Basically the bars were too low. As it happened Jones had recently released a new model of Loop Bar, one with an inbuilt rise of 2.5". A set were duly ordered.

They didn't get put on the Puffin straight away, they went onto Cath's Stooge to give her a chance to see if they suited her. A month or so later and she's decided they aren't for her, so ...

Put Cath's Stooge Moto bars back on her bike and remove the On-One Marys from mine.

Jeff Jones recommends that the brake and gear levers are situated as close to the bar joint as possible but I wanted to use a set of Revelate Williwaw Pogies with these bars (See this post about the pogies I used during the Rovaniemi 150) so I needed to make sure that wherever I fitted them they weren't going to interfere with one another. It turned out that about 50mm further out towards the ends of the bars felt right. It's worth noting that Revelate state that the Williwaws aren't for use with Jones Loop Bars but they seem all right to me, angling the bars downwards appears to help in this regard.

While last time I'd gone for a double colour taping scheme this time I've gone for a single colour, red, but the bars are double wrapped which will help with cold temps.

I'd got a set of ESI Chunky Monkey foam grips so rather than use bar tape to cover the bars all the way to the levers I'd use a section of the grip on the inside of the levers and with luck this would also grip on to the bar tape at that point. The last time I'd fitted these grips I'd really struggled but this time a good dousing of Iso-Propyl Alcohol and they went on in seconds. The inner sections were really easy since they were so short. Then the levers, then the longer outer section. 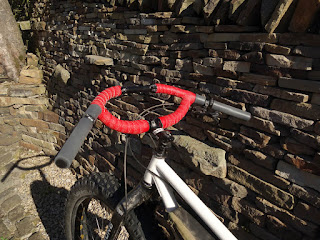 The last job was to angle the bars and then tighten down the levers to suit.

At the weekend I went for a test ride over on some new to me bridleways in the Forest of Bowland. Seems pretty sorted. 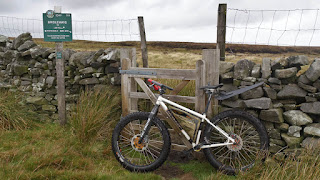