Yesterday I should have mentioned what this blog is about - at least in the short term, I don't know where things will go later on. I thought that I'd record just what goes on after a fairly serious accident and how decisions get made, the ups and downs etc.

So far the lowest point was getting discharged from A&E. You'd think that getting out of a room full of ill people would be cause for celebration but you are moving from a controlled environment where staff can sort out medical needs in short order to a chaotic one. At the same time you aren't "healed", just good enough to be shown the door and free a bed up for the next casualty. In addition I wasn't told what they'd done in the hour long operation I'd had on Sunday night - I'd been in CT scan when they did the rounds - hopefully I'll find out tomorrow when I visit the fracture clinic..

The big problem with sitting at home all day and being unable to actually do anything other than surf the web (write this blog) or watch daytime TV(yeeuch!!!!) is boredom.

I get enough TV as part of my work  so tend not to watch much at home anyway. Also the body tends to do its own thing in these situations and diverts resources, i.e. energy, into fixing itself, so consequently you feel weary and tired all the time. Even caffeine doesn't have much of an effect. You just have to put up with it.

Enough of the moaning, it's not the attitude you need to get better. The day before my fall we had picked up two kittens from some friends to replace our previous cat who died earlier this year. Yep, it's cute fluffy kitten picture time! 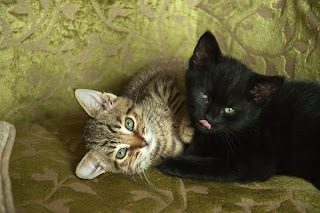 We are calling the black one "Pepper" and the tabby one either "Spice" or "Mace". They've settled in really quickly and haven't called for their mother at all - I think they were just the right age as they were just starting to eat solids so their mother would have started to turn them away fairly soon. There's about an hour of rushing around, playing, fighting, eating then about an hour of sleeping before more play, etc. At the moment they're in sleep mode. Me typing on the computer must be quite interesting because they'll sit watching me from the back of the settee. Like lots of young kids they've ignored the toys we bought for them and mainly play with bits of newspaper that we had been drying onions on. The tabby one seems to prefer me and Pepper prefers my wife, we'll see if that continues.

Hopefully they'll soon be big enough to venture outside or else all our furnishings will be ripped to shreds!
Posted by Bob Wightman at 10:51